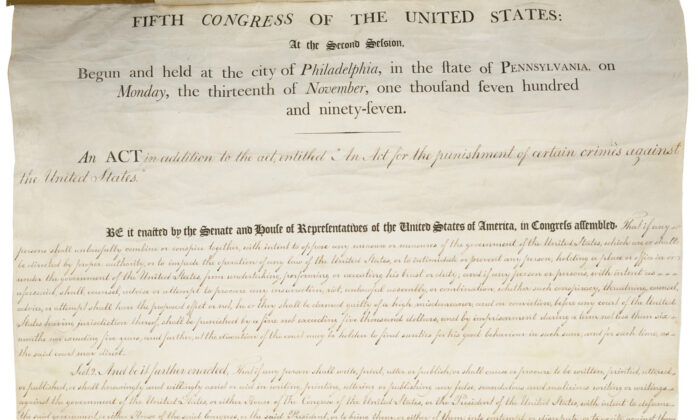 For years, we were told that social media is privately owned so its curation can’t be called censorship; it’s just management. Then, we found out that they were working hand-in-glove with government, so the problem became murkier.

Now the next step is in place: the federal government has created a Disinformation Governance Board operating out of the mega-bureaucracy Department of Homeland Security and headed by an ideological fanatic who loves lockdowns and loathes free speech.

Will the office be political? That’s the whole point. We know this from U.S. history.

The U.S. Constitution was ratified in 1789, complete with a First Amendment to guarantee the right of free speech. You might think that would be the end of the story. In fact, only nine years later, the very idea of free speech got its first test with the Alien and Sedition Acts of 1798.

For all the tendencies these days to celebrate (or condemn) the Framers’ devotion to human liberty, there were always splits and splits within them. It proved too tempting even for many among them to use violence to crush dissent with brazen attacks on free speech.

Under the guise of stopping enemies and shoring up the authority of the federal government, the Sedition Act in particular said:

Two years in prison for criticizing the president? It happened. It was the law. You might have thought that such an action would be impossible given how fresh were the words of the First Amendment. But the impulse of people in power to crack down and stop the free flow of ideas is endemic to statecraft.

Do you notice that the law doesn’t make it illegal to criticize the vice president? That’s because he was Thomas Jefferson, the biggest critic of the Federalists.

The law also provoked public fury that ended up in a surprise victory for Jefferson as president in 1800. The laws were allowed to expire. And the anti-Federalists who were more friendly to trade and limits on government came to power while the centralists and speech controllers were held at bay for another 60 years, until the new challenge came. Then another and another. A new Sedition Act was imposed in 1918 during wartime, and so on it goes.

Under this 1798 law today, probably most of social media would be illegal. Most books on politics wouldn’t be published at all. And yet it happened anyway. And yes, people were prosecuted, almost entirely consisting of newspapers opposed to the ruling party (attacks on free speech are always a partisan matter).

Most of us were raised to believe that free speech is one of the most settled principles of law and public policy. We have recoiled at censorships of the past. We acknowledge the freedom to speak as an essential human right. We are taught the legend and lore of the struggle for it in all our years in school.

And all of this is fine … until it is actually exercised, as it is today, thanks to the mass distribution of communication technology. We are finally getting what we always wanted—the universal right and opportunity to reach the universe of humanity in an instant with thoughts of our own choosing.

And it turns out lots of people don’t like it.

It’s utterly bizarre but true that vast numbers have lost the conviction that freedom for all is better than the attempt to control. We once believed that freedom creates conditions under which truth stands a chance to emerge from the clamor, while the attempt to control ends up politicizing what we are and aren’t permitted to hear. Yes, freedom doesn’t guarantee any particular result, but it does give good results a fighting chance while reinforcing other important things, such as human rights.

These days, that’s not good enough for some people.

What’s so striking about these debates is that censorship has never been less viable than it is today. Try to suppress access in one venue and it immediately pops up in another one. Make it clear that some ideas aren’t welcome here, and you inspire an invisible army of champions of that idea to build yet another venue. You can block, ban, and exclude through known technologies only to have the same pop up in another technology you didn’t know about.

And herein lies the brilliance of a decentralized and highly competitive system of information-sharing and distribution. Consider this: From the end of World War II through the Reagan presidency, there prevailed only three television networks. The government itself exercised the primary influence over the content. These networks began to think of themselves as public utilities, a ruling class, a protected elite, and they dispensed canons of the civic religion on a daily basis.

All of that was blown up in the 1990s. The cartel crumbled, creating an avalanche of speech that only grows in power today despite every attempt to crush it. Now the mainstream big media take up only a small percentage of people’s attention relative to the millions of other possible venues. Not even totalitarian regimes have successfully stopped it.

A certain group out there continues to believe that the free-wheeling world of information is the cause of the astonishing election results of 2016. Following 18 full months of dismissing and denouncing the eventual winner, while predicting the certainty of an outcome that didn’t happen, the public credibility of the old-line establishment news source hit new lows.

The revanchists in our midst still want to settle scores and are prepared to do that by shredding the First Amendment. The takeover of Twitter by Elon Musk, not to mention the multiplicity of alternative venues, threatens that scheme. Also, it’s very possible that the latest and most brazen attempts to shut down debate will lead to a public backlash, as they did in 1800.

John Stuart Mill was as correct about free speech as he was about pandemic controls. No authority can substitute for the activity, creativity, and adaptability of the human mind. We need systems that celebrate that, and not attempt surreptitious methods for imposing Orwellian-style thought control.

Ideas are more powerful than armies, and the urge to censor is an implicit recognition of that. Still, it didn’t work in 1798, and it surely cannot work in 2022.