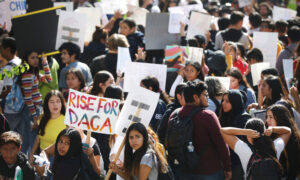 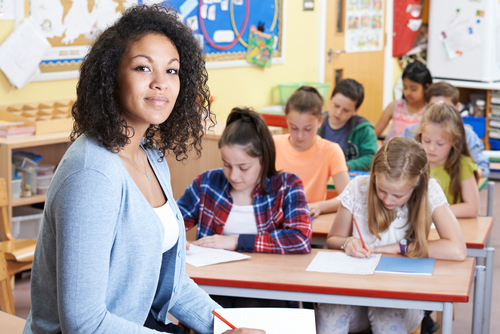 Teachers in the U.S. are facing daunting financial challenges amid stalled salaries, crimped pensions, and an ever-rising cost of living.
Education

NEW YORK—It took Andrew Pillow eight years of teaching at a charter school in Indianapolis before he finally earned more than the manager at the Panda Express Chinese fast-food restaurant that he passed each day on his way to work.

The 29-year-old was fine with his career decision while he was single. But now that Pillow is married, considering having kids and buying a house, he wonders how he’ll ever get ahead.

“I tell my students: ‘Go to college, you’ll be able to afford all this stuff.’ I feel like I’m lying to them,” Pillow said.

As another school year dawns across the country, teachers in the U.S. are facing daunting financial challenges amid stalled salaries, crimped pensions, and an ever-rising cost of living. At each stage of life, the long-standing teacher philosophy of “slow and steady wins the race” is fraying.

Here are three crucial retirement considerations that teachers need to start the school year on the right foot:

Think Beyond the Pension

After 32 years of teaching in New York, Marc Rosner’s salary has risen from $19,000, but not as much as those of his peers in other professions. Now 54 and in the midst of a divorce, his pension is valued at $500,000. It is a base of security, although not that much of a leg up.

Rosner has a similar amount stashed away from supplemental contributions into a 403(b) plan, the teacher version of a defined contribution plan.

“Anyone who was responsibly putting money into retirement would have that much by their mid-50s,” said Rosner, who will try to stay on the job for at least another eight years, until his two kids are in college.

He also has earned extra money doing educational consulting, writing books, and working in publishing. He now has a jewelry appraisal business on the side.

Not all teachers realize how much they need this multi-pronged approach. Pensions used to be the gold standard, furnishing a monthly check for life. These days, the percentage of income a pension replaces depends on your locale.

In the New Jersey district where Mark Weber teaches music (and consults, gives private lessons and runs a choir), there are five tiers, with each rung receiving fewer benefits than those who started before them.

The pension plan also is notoriously underfunded, so Weber worries his payout could be less by the time he retires. Already the state has taken away a cost of living provision.

“I came into this in mid-career, so my pension would be about one-fourth of salary. That’s not enough to live on. We have to make other plans,” Weber said.

One impediment for planning is that there can be too many options and not enough information available.

Marit Sullivan, 36, has been teaching at a middle school in Connecticut for a few years, since moving from Minnesota. No one has explained the retirement plans yet. With her take-home pay eaten up by childcare costs, Sullivan doesn’t feel she can contribute anyway.

Certified financial adviser Brooke Napiwocki of Milwaukee built a practice out of advising teachers, because they get little help elsewhere. She’s offered guidance to a client in Alaska who needed help sorting through his district’s three-level plan, and around 60 or so investment options among a half-dozen custodians.

Mychal Eagleson, a certified financial planner in Indiana, said many clients come to him after paying into their 403(b) plans for years without designating any investments. With all their money in cash, they’ve actually lost money in relation to inflation.

Eagleson cautioned educators to think about their whole package. If you already have a pension and Social Security, create an emergency stash in a Roth IRA. Roth accounts have the added benefit of not being subject to income tax or required minimum distributions after age 70.

Retired teacher Shirley Wolf is feeling the anxiety of not having a dedicated nest egg. She retired 10 years ago at 57 and found that the toughest part was paying for health insurance until Medicare kicked in at 65. She doesn’t get Social Security, because Kentucky is one of 15 states that incorporates that into the pensions. Her supplemental contributions went into an annuity.

“Those first years of retirement are among the scariest until you settle into a new routine and manage money,” Wolf said. “I didn’t know it was going to come so quickly. It flashed before my eyes.”