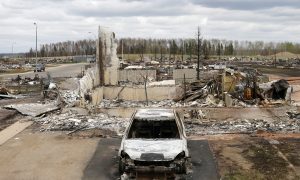 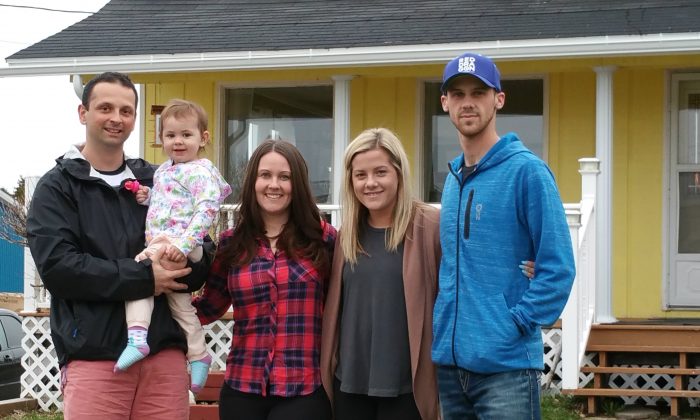 Back Home in Newfoundland: The Harrowing Journey From Fort McMurray

CODROY VALLEY, Canada—The words “Newfoundland” and “home” are often used interchangeably. Even if you’re not from the eastern province of Newfoundland, people there might ask you how long you’ll be “home” for.

Lucrative work in the oil industry draws countless Newfoundlanders out to Fort McMurray. They earn salaries out there some 80 percent higher than they could at home.

As the city was evacuated, there wasn’t a casual meeting in Codroy Valley, Newfoundland, that didn’t include a comment on the fires and updates on how family members out there were doing.

Newfoundlanders were riveted on the news, but felt helpless, unable to do much for their loved ones some 2,000 miles across the country.

Siblings Wallace Gale and Anna Foley left Codroy Valley in 2008 to settle in Fort McMurray. They arrived back in the Valley on May 7 with their families, exhausted and more in need of home than ever.

Mr. Gale was at work when he first heard the evacuation order over the radio. He is a heavy equipment operator for the oil company Suncor. The work site was “complete chaos,” he said. “Everybody was just like, ‘Get me out of here, I have to get home to my family.'”

With only a couple of hours to decide what to do, she also didn’t know what she should pack. “I was having an internal struggle,” she said. “[I was thinking,] ‘You’ll be back in a second, don’t pack all this ridiculous stuff.’ But then I ripped all the art off my wall and put that in the car.”

The Gales eventually got in touch with each other once Mr. Gale got back into the city, and they left together.

Mrs. Foley, a registered nurse working for Suncor, looked out the windows from her workplace on the outskirts of town and saw the smoke rolling in. “It looked like black rain clouds were coming in. It was terrifying.”

Mr. Gale and Mrs. Foley never imagined that morning that their lives would take such a turn.

“I had woken up that morning and it was beautiful,” Mrs. Foley said. “The sun was shining, the sky was blue, and according to the news, the fire hadn’t grown overnight, so everyone felt pretty good.”

They have a saying in Newfoundland, “slow as cold molasses.” It could be used to describe the exodus.

Mrs. Foley, her husband, Brad, and her 2-year-old daughter, Lyla, were heading out of town at a speed of about 50 feet per hour.

The sky was clear, but it all of a sudden turned black and they were engulfed by smoke. With a toddler in the car and paralyzed in traffic, they waited anxiously until they could finally turn onto a different road and were able to move.

They drove through downtown Fort McMurray on their way out and Ms. Foley described it as being like a scene from “The Walking Dead.” Mr. Gale agreed that was the best way to describe it.

“Cars [were] just strewn everywhere, there was a bus in between the two highways,” Ms. Foley said. “It’s a busy town, it’s basically a town that never sleeps, but the whole downtown area was like a ghost town … that was really scary too.”

The fire was right up to the road as they drove along it. Going through the Beacon Hill area, they saw a Super 8 hotel burning. No one was there to put it out.

As they progressed southward, a new worry emerged. They were almost out of gas.

And they weren’t the only ones. The closest gas station outside of Fort McMurray is about 125 miles (200 kilometers) away. There’s only one other gas station after that on the way to Edmonton, the closest major city (about 250 miles away). Both of these gas stations were empty.

That’s what happens when tens of thousands of people suddenly leave for a 250-mile trip. Cars were stranded along the side of the road the whole way, out of gas.

“We didn’t have any pillows, we didn’t have any blankets, we had barely any food,” Ms. Foley said. “I was really, really worried we were going to be stuck on the side of the road with a 2-year-old and without any supplies.”

Ms. Foley is part of a Fort McMurray Facebook group. Someone posted a message about a camp south of the city that was giving gas away for free.

Meanwhile the Gales napped on the side of the road, frustrated as they sat in their car not getting anywhere fast. A friend of theirs had a jerry can full of gas and helped them top up when they got low.

Ms. Gale was amazed by how kind everyone was. “Everyone was so respectful in their driving. No one was [honking] their horns, no one was yelling,” she said. A woman in a car next to them offered them bottles of water; people let other cars in front of them, even though everyone was anxious to leave.

It took them about 21 hours to get to Edmonton. It usually takes about 4 hours. The Gales and the Foleys reunited in Edmonton for a brief rest before heading on to Calgary, another 180 miles (300 kilometers).

On Safe Ground, Surveying the Damage

They sat with close friends of theirs in a hotel room in Edmonton as those friends watched via security cameras as their house burned.

That house, in the Stonecreek area of Fort McMurray, wasn’t far from the Gales’ home in Timberlea. The Foleys also have a house in the Timberlea area. But as far as they know, their houses are still safe.

Receiving much kindness from local businesses along the way, the two families finally flew to Newfoundland from Calgary.

As they sat in the comfort of the Gale family home in Codroy Valley, none of them doubted for a minute that they would return to Fort McMurray.

Ms. Foley talked about how some Fort McMurray locals were already planning to have a block party when they returned. They talked of going back to help the city clean up and recover.

Mr. Gale and Mr. Foley might be back at work within a week or two. They won’t be going to their homes; instead they will be working from camps temporarily. But they feel lucky to still have work.

All four of them are impressed with how their employers have taken care of them. All of them except Ms. Gale work for Suncor, and they are all still receiving their full wages.

Ms. Gale is a financial adviser at Scotiabank in downtown Fort McMurray. ScotiaBank is also continuing to pay its employees and the company’s vice president has assured them they will be taken care of all along. Some of their friends working for smaller companies have not been so fortunate.

Scotiabank has also put a freeze on the Gales’ mortgage payments and Ford has done the same for their car payments, so they don’t have to worry about their bills and income as they get back on their feet.

With the fall in real estate value, they’ve still taken a hit, not to mention if their home burns down. They aren’t sure how much the insurance would cover, whether they would only be reimbursed for the structure and not the value of the land, which was relatively high in Fort McMurray.

They stay glued to the news here in Newfoundland. But the further they’ve gotten from the fire, Ms. Foley said, the more it has all felt surreal, like it’s just a dream.

Back home in Newfoundland, they’ve received support not only from their families, but from the whole community. Ms. Gale said: “You get a lot of warm hugs. People who would usually just wave to you will come up and hug you.”