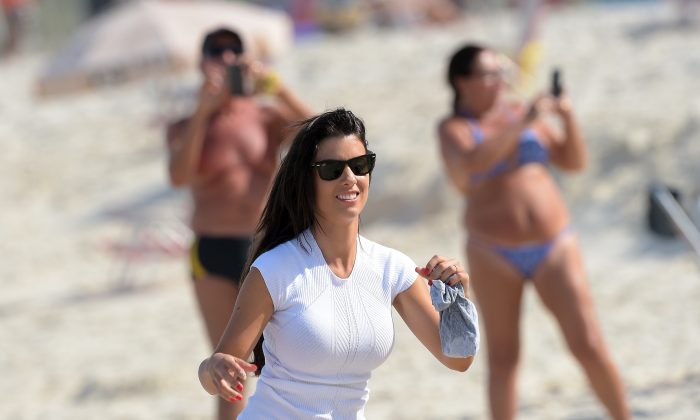 Ludivine Sagna, wife of France's defender Bacary Sagna, enjoys a day out on a beach in Rio de Janeiro during the 2014 FIFA World Cup on June 26, 2014. (FRANCK FIFE/AFP/Getty Images)
Sports

The 2014 World Cup is into the knock-out stages, and fans will be wondering about the wives and girlfriends of the various soccer stars.

According to Fabwags.com, Mrs Sagna is a model of French-Algerian descent, and has her own children’s line of clothes.

The couple have known each other since they were children, started dating during their teenage years, and officially got together in a relationship at 17.

See an AP article on Sagna below.

RIBEIRAO PRETO, Brazil (AP) — While France coach Didier Deschamps has been pointedly playing down his team’s expectations at the World Cup, defender Bacary Sagna is now doing the exact opposite.

France takes on Nigeria on Monday in their last 16 clash and Sagna is already thinking much further ahead.

Asked if France’s World Cup will be considered a success if it reaches the quarterfinal stage, his response was quick and blunt.

Such bold talk is surprising, especially given how cautious Deschamps has been in trying not to raise hopes too high after an encouraging start, which saw France thrash Switzerland 5-2 and top Group E with seven points.

Deschamps cautioned after the Switzerland win that fans should not get too carried away.

Noel Le Graet, the French Football Federation president went even further, warning that it would be a “bit pretentious” to say that France is good enough to win the tournament.” He added that “we don’t have the confidence of the Germans or the Brazilian team. We can’t compare ourselves to the big nations yet.”

After the 0-0 draw against Ecuador on Wednesday, in which a sloppy France side missed a lot of chances, they seemed to have been proved right.

But Sagna, who made his 42nd appearance for France against Ecuador, has clearly seen enough cause for optimism.

“The objective is becoming and more and more precise,” he said, with a view to raising the trophy on July 13. “It’s become the main objective because we’re four games from the title and we want to do it.”

Spain, Italy, Portugal and England have been knocked out of the tournament, leaving Germany, Netherlands and France as the leading European teams left.

“We’re lucky enough to be playing in the last 16 and that’s not everyone’s case,” Sagna said. “A lot of big teams have gone out.”

He is challenging Mathieu Debuchy to start at right back against Nigeria.

“Not so long ago I was playing every game and now it’s Mathieu. I don’t have a problem with it at all,” Sagna said. “Obviously I’d like to play, as everyone would, but 23 of us can’t play.”

Sagna, who helped Arsenal win the FA Cup last season, is counting on French fans to turn out in numbers at the Estadio Nacional in Brasilia — as they did when around 10,000 cheered on Les Bleus on at the Maracana against Ecuador.

“What has struck me the most has been the relationship with the fans,” he said. “In Rio it was like we were at the Stade de France, it makes the players feel confident. We know that France is also appreciated by the Brazilians, and hopefully that will be the case on Monday.”