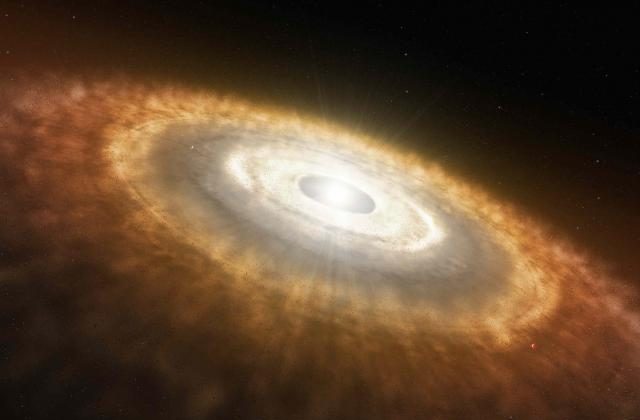 As solar systems develop around young stars, exoplanet “pileups” and “deserts” may result from the generation of specific orbits.

Using computer simulations, two astronomers have developed a theory to explain why gas giants like Jupiter and Saturn stay at a distance from their suns, rather than following orbits at regular intervals.

“Our results show that the final distribution of planets does not vary smoothly with distance from the star, but instead has clear ‘deserts’—deficits of planets—and ‘pileups’ of planets at particular locations,” said study co-author Ilaria Pascucci at the University of Arizona’s Lunar and Planetary Laboratory in a press release.

Sun-like stars form at the center of clouds of gas and dust as matter clumps together. The stars gather mass, increasing their gravitational force, and causing the surrounding cloud to spin faster and flatten into a protoplanetary disk from which exoplanets later form.

Powerful radiation from the star probably creates spaces in the disk, and these gaps then form barriers, sending planets into particular orbits.

The gaps’ locations are determined by the planets’ masses, but are usually found between 1 and 2 astronomical units (AU) from the star, with 1 AU being the average distance from the Earth to the sun.

Previously, it was thought that the disk thinned as matter accreted onto the star. However, the scientists observed a process called photo-evaporation that causes high-energy photons from the star to heat the disk surface.

“The disk material that is very close to the star is very hot, but it is held in place by the star’s strong gravity,” explained study co-author Richard Alexander at the U.K.’s University of Leicester in the release.

“Further out in the disk where gravity is much weaker, the heated gas evaporates into space.”

The researchers simulated disks accreting matter onto their stars while accounting for the effects of photo-evaporation. They found that gaps are cleared by the effects of the star’s heat and gravity between 1 and 2 AU.

“We don’t yet know exactly where and when planets form around young stars, so our models considered developing solar systems with various combinations of giant planets at different locations and different stages in time,” Alexander said.

The models showed that giant planets moved toward their suns as matter is drawn in, and then occupied a stable orbit when they hit a gap.

“The planets either stop right before or behind the gap, creating a pileup,” Pascucci said. “The local concentration of planets leaves behind regions elsewhere in the disk that are devoid of any planets.”

“This uneven distribution is exactly what we see in many newly discovered solar systems.”

The team expects to see further evidence for planet pileups at about 1 AU as results are gathered from more exoplanet surveys that can detect outer giant planets.

“As we discover more exoplanets, we will be able to test these predictions in detail and learn more about the conditions under which planets form,” Pascucci concluded.

The study will appear in Monthly Notices of the Royal Astronomical Society.