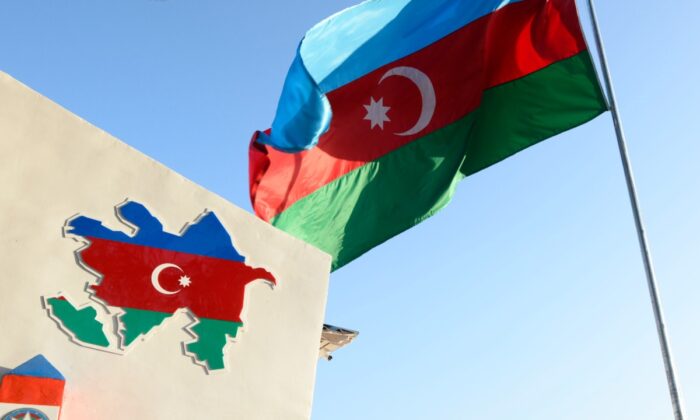 An Azerbaijani flag is seen in the village of Zangilan, Azerbaijan, on Jan. 5, 2021. (Tofik Babayev/AFP via Getty Images)
Middle East

Azerbaijan will be opening an embassy in Tel Aviv, Israel, after its Parliament approved the decision on Nov. 18 in what officials say will help improve continued economic relations and cooperation between the two nations.

The move would make Azerbaijan—which shares borders with Iran, Russia, Armenia, Georgia, and Turkey—the first Shiite majority country to do so.

Both Azerbaijan and Israel share joint concerns over Iran, which has been steadily advancing its nuclear program.

Israel’s Prime Minister, Yair Lapid, welcomed the move in a statement on Friday, stating that Azerbaijan is an “important partner of Israel and home to one of the largest Jewish communities in the Muslim world.”

The decision to open an embassy reflects the depth of the relationship between the two countries and “is the result of the Israeli government’s efforts to build strong diplomatic bridges with the Muslim world,” the statement said. “I want to thank President Ilham Aliyev and congratulate the Azeri people who will now be represented for the first time in the State of Israel.”

Azerbaijan has become a large buyer of Israeli oil and weapons systems, with data from the Stockholm International Peace Research Institute (Sipri) showing that Israel supplied about 27 percent of major arms imports to Azerbaijan from 2011 until 2020.

From 2016–2020, Israel accounted for 69 percent of Azerbaijan’s major arms imports, according to the data.

In a separate statement on Twitter on Nov. 19, Azerbaijan’s economy minister Mikayil Jabbarov said the decision to establish the Azerbaijani embassy in Israel will contribute to the development of economic relations and cooperation between the two countries, while also promoting trade relations and “further strengthening our partnership.”

Israel has had an embassy in Baku, the Azerbaijani capital, since 1992 and both countries have enjoyed close relations for 30 years.

Azerbaijan will also be opening a representative office in the state of Palestine after the Azerbaijani Parliament approved the move on Friday too, Wafa news agency reported.

Despite this, the government’s decision to open an embassy in Tel Aviv prompted criticism from Palestinian officials at a time of increasingly fractured relations with the Palestinian Authority, in which Iran-backed terrorist organization Hamas currently holds high level positions.

“Unfortunately, Azerbaijan’s decision comes at a time when the Israeli right-wing is taking power in Israel, so this is considered to be a reward for extremist Israelis for their attacks against the Palestinians and Islamic sanctities,” the Palestinian Authority’s Social Development Minister Ahmed Majdalani said in a statement to Arab News. “We express our astonishment and condemnation of this uncalculated political step that harms the Palestinians.”

However, former Palestinian Foreign Minister Nasser Al-Kidwa played down the news, noting that countries such as the UAE and Bahrain, which he said are “more important than Azerbaijan” have previously opened embassies in Israel.