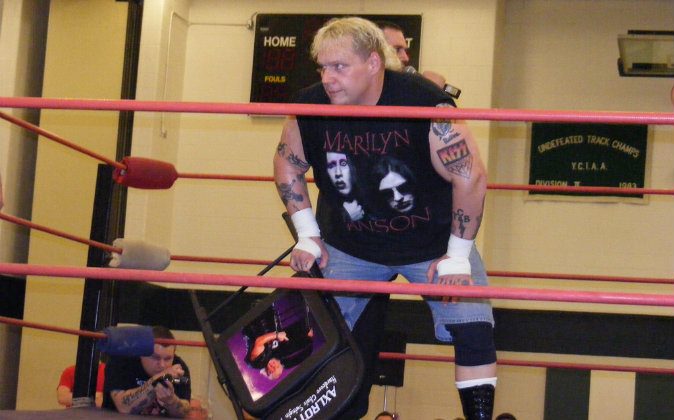 Axl Rotten, a professional wrestler who died earlier this month, died via an accidental overdose, according to a report.

The Baltimore Sun reported that the wrestler, born Brian Knighton, was found unconscious on the bathroom floor of a McDonald’s in Linthicum, Maryland.

WWE is saddened to learn of reports that Brian Knighton, best known for competing in ECW as Axl Rotten from 1993 to 1999, has passed away.
— WWE

Knighton apparently had pulled down the infant changing table and placed drug paraphernalia and a broken, bent tablespoon on it. There was a “crystalline residue” on the spoon, an Anne Arundel County Police report said, according to the Sun. Officials also found a pill bottle contained capsules of a “brownish substance” inside. Police said they suspected it was heroin.

The Sun said it incorrectly attributed the announcement of Knighton’s death to the Office of the Chief Medical Examiner in Baltimore.

“WWE is saddened to learn of reports that Brian Knighton, best known for competing in ECW as Axl Rotten from 1993 to 1999, has passed away. WWE extends its condolences to Knighton’s family, friends and fans,” the WWE, which owns ECW, said in a statement after his Feb. 4 death.

Knighton was known for “the extremes he would go to in the ring, including mutilating himself in matches involving barbed wire and broken glass,” the Sun reported in 2005.

Knighton “helped establish ECW … as the anti-establishment organization and a stark contrast to the family entertainment” of the WWE, formerly known as the WWF.

An online fundraising page that was set up before his death detailed Knighton’s physical ailments due to his wrestling career.

“On October 30th 2014 his back gave way from years of bumping and he was left in agony on the floor. Since then he has been hospitalized at Peninsula Regional Medical Centre reserving physical therapy daily. Originally it was in the hopes he could resume his career, and walk again. Sadly doctors have now informed him that surgery is unavoidable and he requires two spinal surgeries on his cervical vertebrae. If these surgeries are not a success then spending the rest of his life in a wheelchair is a very realistic possibility,” it read.