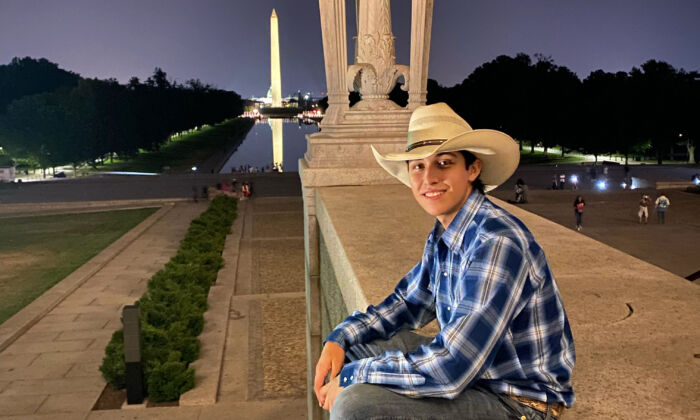 Colt Jaxon, 16, of Florida, made his first trip to Washington, as a winner of a national patriotic songwriting contest, in summer 2022. (Courtesy of Colt Jaxon)
US

Colt, who is homeschooled and lives on a small cattle ranch near Tampa, Fla., won a nationwide First Amendment-themed songwriting contest sponsored by Constituting America.

The nonprofit organization educates people about the U.S. Constitution “and the rights and liberties it provides and protects for all of us.”

The organization paid for Colt’s winning song to be professionally recorded at a Fort Worth sound studio earlier this year. Last week, Colt’s tune, “1A,” was ranked the fourth-most-streamed song on Play MPE, which specializes in “promotional music delivery right into the hands of radio and other influencers,” its website says.

Colt, his parents, and his Grammy Award-winning vocal coach, told The Epoch Times about the secrets to Colt’s success thus far, which they hope will catapult him toward a successful career in the music industry.

From an early age, Colt seemed to have an innate ability to play guitar and sing, his parents say, noting that he began playing with a toy guitar that his grandfather bought him when he was about 8.

Because his parents weren’t musically inclined, they didn’t comprehend the extent of his talents until Colt started taking lessons—and teachers began remarking that there was something special about him.

One of those teachers is his current vocal coach, Millie Puente.

Her cousin, the late Tito Puente, became legendary for his unique blend of jazzy Afro-Latin; he’s best known for writing “Oye Como Va,” an infectious cha-cha-cha that became famous after the American group, Santana, recorded it in 1970.

“I noticed that he had a special gift that needed to be developed,” Mille Puente said.

Puente said that was the same comment that cousin Tito Puente had made about her years ago. She told Colt: “You are going to go places with your talent … Hold onto your pants because it’s going to be big!’”

She thinks it’s remarkable that “1A” ranked so high on Play MPE. “When you’re No. 4, wow! I mean, it takes a lot to be No. 4” among established artists, she said.

Puente said she wouldn’t be surprised if Colt follows in her footsteps and becomes a Grammy winner someday. She also said his 11-year-old sister is equally talented; together, they could make a stellar brother-and-sister duo.

Colt’s vocal qualities fit perfectly with the country music genre, Puente said, and she is amazed by the songs he writes and performs during their weekly sessions, which have been ongoing for the better part of five years.

Out of about 30 students, Colt, his sister, and two other young ladies show the most promise, Puente said. She is pouring into Colt all the knowledge and techniques she picked up from her famous cousin.

“I don’t pass these things down unless they have a lot of talent and a lot of passion,” Puente said.

Colt’s father, Eric Monroe, said his son seems to be constantly thinking about music and honing his skills. So far, he’s written about 30 songs, almost half Christian and half country music.

Monroe is incredibly proud that his son won a national contest about the First Amendment because American history is an essential part of the values taught in their home and the family’s homeschool curriculum.

Colt, who greets everyone with a warm “Howdy,” said he has found inspiration from music artists in many genres across many different eras. Colt was searching for a Vince Gill song on YouTube when he stumbled upon that singer’s involvement with Constituting America. That prompted Colt to look for the contest.

The teen went into research mode. He developed a deep understanding of the First Amendment, and his song was born. Part of the lyrics: “These days we’re under attack.
They wanna take our freedoms back … Bless your heart; I’ll keep my rights ‘cause 1A is worth the fight. The First Amendment is the one I love. Without you, what would we become?”

Colt said he has different methods for writing his songs. Sometimes he writes the music first, then the lyrics; other times, he writes them simultaneously. But he wrote the lyrics for “1A” first, because the words were paramount for the contest.

“Our country would not be where it is today without the First Amendment,” Colt said. “The First Amendment is one of the things that keeps it together. We wouldn’t really be free without it.”

Americans ‘Hunger’ For This Type of Music

Colt entered Constituting America’s We The Future contest almost a year ago; he was notified in early 2022 that his song had won—the fulfilment of his prayers.

Elizabeth Pinkerton, a spokeswoman for Constituting America, said the contest has proven valuable in teaching students “founding principles that they aren’t all learning in school.”

The creative arts contest dates to 2010, offering awards in many categories, ranging from essays to short films; entries are accepted across many age groups, ranging from elementary school to adults ages 65 and older.

Pinkerton noted that Constituting America is one of the few Constitution-oriented groups that reach young people on their mobile phones via Snapchat and other social media platforms.

As a result of the songwriting contest, “We’ve had many hits that have done well because there is a hunger out there for this kind of music,” Pinkerton said. “But Colt’s music has a unique sound and style.”

She noted that Colt’s song reminds everyone that freedoms can be taken away if people don’t understand them. She encourages people to participate in a live pre-Constitution Day program on Sept. 16.

To get his winning song in shape for distribution, Colt flew from Florida to Texas, where he worked with Brandon Vanderford of Foundation Studios to record and produce the piece.

Vanderford worked with Colt about six hours to shorten the lyrics and make the song more appealing commercially. Colt said he could tell that Vanderford cared about him and the song.

In June, Constituting America treated Colt and other young contest winners to a trip to Washington. That was a first for Colt, and it left a big impression on him.

“When you learn about the American government in books, it all seems very far away and detached,” he said. But after gazing at the Capitol building, seeing the nearby American flags whipping in the wind, and reading the Gettysburg Address carved in stone inside the Lincoln Memorial, the “enormity” of it all touched him.

“I would stand there and feel the pride for the United States of America just building up in me,” Colt said. “It was really quite an overwhelming experience.”

Such experiences make the foundations of our nation suddenly seem “very personal to you as an American,” Colt said. “The Founding Fathers sacrificed much so that we could be free. It is a debt we can never repay.”

Colt said he’s grateful for the experiences he’s had so far because of his contest win.

“It’s pretty crazy, and I’m definitely grateful for the experience, but I have a long way to go,” he said. He hopes to produce an album next.

He said he would like to offer this advice to other young musicians, singers, and songwriters: “You can make your dreams reality, especially in this country, just if you work hard enough.

“When you fall, fall forward. Don’t fall down and give up. Use that to push you forward. In this country, you can do that. In a lot of countries, you can’t.”