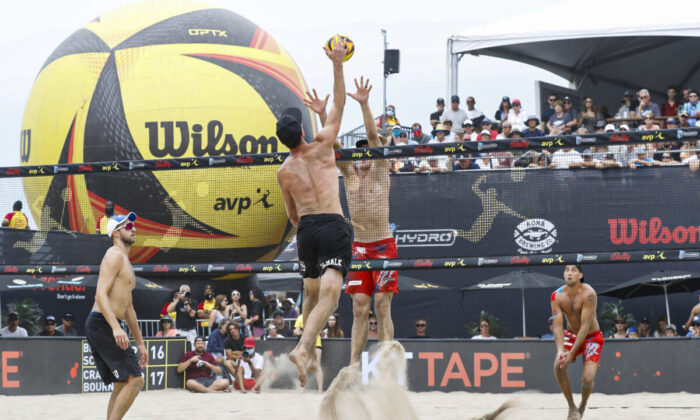 Tri Bourne and Chaim Schalk jump for the ball at the net in the semi final match at the AVP Gold Series Manhattan Beach Open, in Manhattan Beach, Calif., on August 22, 2021 (Joe Scarnici/Getty Images)
Sports

The Association of Volleyball Professionals (AVP) beach volleyball tour season kicks off its longest schedule in over a decade this weekend in Austin, Texas, with 16 tournaments across the country—along with its largest purse since 2009 of $2 million.

The AVP was bought by Bally Sports last year, which brought much-needed support to the league that has struggled through two bankruptcies.

It previously held seven or eight tournaments a year under owner Donald Sun before the pandemic, and has held only three tournaments in each of the last two years during the lockdown period.

“In our sport, it’s very natural to have a lot of partner switches, especially after an Olympic year,” said Hughes. “There’s always something getting mixed up. I’m really excited for my new partnership and what we have going so far. It’s a new opportunity for everyone to get better.”

“I’m so thankful that we have so many tournaments, and I’m ready to rock and roll,” said Tokyo Olympian Kelly Cheng. “I’m blown away. It’s been hard financially the last few years. I’m so thankful to be able to compete.”

All four of the Women’s U.S. teams that competed in the Tokyo Games have changed partners.

The No. 1 seed women’s team this weekend are longtime partners and Canadians Sarah Pavan and Melissa Humana-Paredes, who won the 2019 World Championships, and lost in the quarterfinals at the Tokyo Olympics.

Following qualifications for the Tokyo Olympics with Jake Gibb, Taylor Crabb is now with Taylor Sander.

Tri Bourne, who subbed for Crabb as Gibb’s Olympic partner, continues his partnership with Trevor Crabb, Taylor’s older brother; and will be the top-seeded men’s team in Austin.

“Our U.S. men were pretty old, kind of toward the end of their careers. We knew that after this Olympics a lot of things were going to change,” said Crabb. “I think it’s great for the sport! It’s exciting for the sport! That there’s this new generation that’s battling it out for the top spot now.”

“We haven’t had a full schedule in a long time,” Bourne said. “For a lot of us players, playing on the domestic tour is the most fun. The world tour is a completely different beast; it’s a great challenge in a different way. But having a full schedule and kicking things off here in Austin, it’s exciting.”

The AVP Tour returns to its home in Southern California July 8–10 for the Hermosa Beach Open, Manhattan Beach Open August 19–21, and the Huntington Beach Open November 12–13.

The series kicks off the season with five stops with prize money totaling $125,000.

The AVP Tour consists of seven events with prize purses of $50,000, offering less experienced and mid-ranked players the opportunity to break into the Pro Series.

The AVP Gold Series will consist of three events with prize purses totaling $300,000. The top two from each gender to advance to the Phoenix Championship, alongside two potential wild cards.

The Manhattan Beach Open, aka “The Granddaddy of them All,” as usual will be the biggest draw of all 16 events, with a 32-team Main Draw, and a 96-team qualifier per gender.