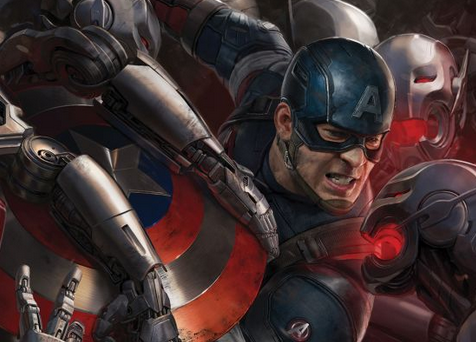 Avengers 2 Age of Ultron footage was shown at the San Diego Comic-Con but not publicly released.

Fans are wondering when the first trailer will be officially released for the viewing pleasure of all.

Unfortunately, “not for a while,” Marvel President Kevin Feige told Cinema Blend.

He added that footage won’t be coming to the Internet until “later.”

“Much later,” he added, without specifying a date or even a timeframe.

Fans can take heart in the fact that the first trailer earned good reviews from people who saw it at Comic-Con.

“Avengers: Age of Ultron Footage Shatters Our Worlds And Blows Our Minds,” said an article from io9, for example.

The footage started with the Avengers sitting around trying to pick up Thor’s hammer, but no one can.

Then Ultron strides into the room. “How could you be worthy? You’re all killers,” Ultron says. “You want to protect the world, but you don’t want to it to change. There’s only one path to peace: your extinction.” Then a bunch of robots burst through the wall and attack the Avengers.

The footage includes a fight between the Hulk and a giant robot and Thor grabbing Stark by the throat.

“We transition to a montage of war clips, some of which are in snow-covered areas,” according to Hypable. “‘This is the end. The end of the path,'” Iron Man says. He’s wearing the Hulkbuster armor in one scene. In another shot we see Captain America’s shield… broken. Quicksilver (Aaron Taylor-Johnson) and Scarlet Witch (Elizabeth Olsen) make appearances as well.

“‘There are no strings on me,'” Ultron says at the end, suggesting that this new villain can’t be controlled. Then we see Iron Man looking at Captain America, Thor, and a ton of other people dead on the ground.”