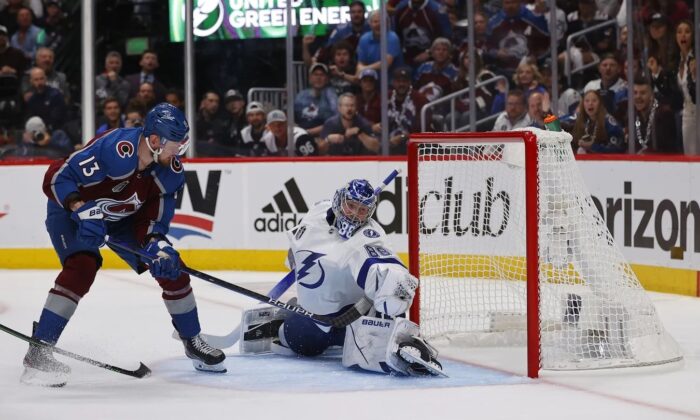 The Colorado Avalanche made good on their vow to avoid a letdown in Game 2, and now they’re two wins away from winning it all.

Cale Makar and Valeri Nichushkin scored two goals each, Darcy Kuemper had 16 saves and the Colorado Avalanche demolished the Tampa Bay Lightning 7–0 in Game 2 of the Stanley Cup Final in Denver on Saturday night.

“It was a little bit of a weird one,” Makar said. “Guys were getting opportunities and we were able to capitalize tonight.”

Colorado leads the series 2–0 with Game 3 set for Tampa Bay on Monday night. It was the biggest shutout in the finals since Pittsburgh beat the Minnesota North Stars 8–0 in Game 6 to clinch the 1991 Cup.

Andre Burakovsky had a goal and an assist, Josh Manson and Darren Helm also scored, Mikko Rantanen had three assists and Alex Newhook had two helpers for the Avalanche.

Burakovsky left the game in the second period after getting hit on the hand with the puck. Coach Jared Bednar said Burakovsky will need to be evaluated further before his status is determined.

Andre Vasilevskiy allowed all seven goals and turned away 23 shots for the Lightning.

“This is the playoffs. We’re here to win hockey games. Vasy gives us the best chance to win a hockey game,” Cooper said.

The Avalanche took the drama out of this one early and never gave Tampa Bay hope.

They went on the power play just 1:01 into the game when Ryan McDonagh was called for roughing. Tampa Bay nearly killed off the penalty until Burakovsky spotted Nichushkin going to the front of the net, fed him the puck and Nichushkin tipped it by Vasilevskiy at 2:54.

Colorado tacked on two more goals in the first.

Andrew Cogliano, who returned after missing Game 1 with a thumb injury, passed Manson the puck on a 2-on-1 and the defenseman beat Vasilevskiy to the far side at 7:55. It was Manson’s third of the playoffs.

The Avalanche capped their big period when Burakovsky skated down the slot and knocked in a rebound off Rantanen’s wrister at 13:52, his third goal of the postseason.

Nichushkin got his second of the game and eighth of the playoffs at 4:51 of the second period. Rantanen stole the puck from Ondrej Palat along the backboards, hit Nichushkin in the slot, and he one-timed it through Vasilevskiy’s pads to make it 4–0.

Helm padded the lead late in the second period when he skated into the Lightning end and beat Vasilevskiy with a high shot at 16:26. It was his second of the postseason.

Makar put Colorado ahead 6–0 with a short-handed goal at 2:04 of the third and scored a power-play goal at 9:49—his seventh of the postseason—to complete the rout.

Nevertheless, the Avalanche expect the two-time defending champion Lightning to come out strong in Game 3.

“This is a championship caliber team. I don’t think they get frustrated. They’re patient and they’ll adjust,” Manson said. “We can’t think we’re under their skin, we’ve just got to keep going. It feels good, but the job’s not done.”