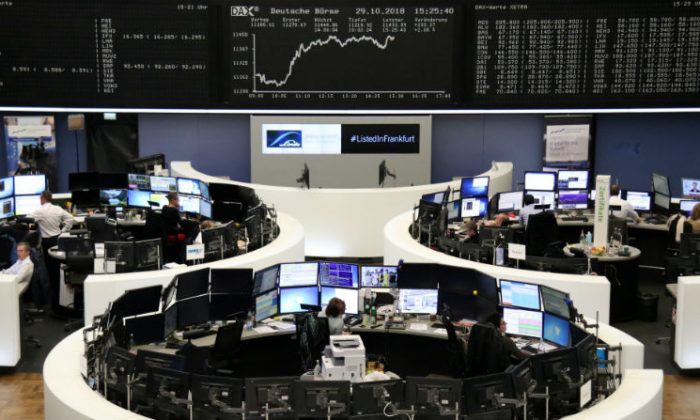 The German share price index DAX graph is pictured at the stock exchange in Frankfurt, Germany, on Oct. 29, 2018. (Staff/Reuters)
Europe

LONDON—A rally in auto and banking stocks helped European shares rise on Oct. 29 in a rebound from a sell-off which had depressed them to a level not seen since December 2016.

The gains in Europe followed a sluggish performance in Asia, where worries about China’s slowing economy weighed, although a mixed start on Wall Street pulled main indexes off their highs.

“European markets enjoyed a stronger start to the week, despite a sell-off in China as investors digested the impact of a trade war with the U.S. on industrial earnings,” said Russ Mould, investment director at AJ Bell.

Despite the bounce, the STOXX 600 remained on track for its worst monthly performance since August 2015.

Italian banks shone after rating agency S&P’s kept its credit rating two notches above non-investment grade for Italian sovereign bonds, even though it lowered its outlook to negative, saying that the new government’s policy plans were weighing on the country’s growth and debt prospects.

Autos were the strongest sectoral performer, up 3 percent. They rose sharply after a report said that China was considering halving its car purchase tax to 5 percent to support its struggling auto industry, which has been hit hard by the ongoing Sino-U.S. trade war.

The report lifted shares in carmaker Volkswagen by 4 percent, and drove tire maker Continental and chipmaker Infineon, which supplies technology to the automotive industry, to the top of the German DAX index.

Their gains helped offset worries over the political outlook in Germany, Europe’s largest economy after German Chancellor Angela Merkel said she would not seek re-election as party chairwoman at a conference in early December and that her current term as chancellor would be her last.

Drugmaker Novartis added 1.7 percent. The Swiss group and Pfizer are teaming up to develop treatments for a liver disease many drug companies believe will become a hugely lucrative market.