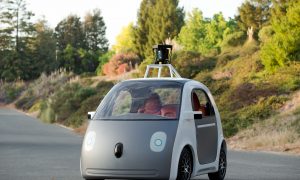 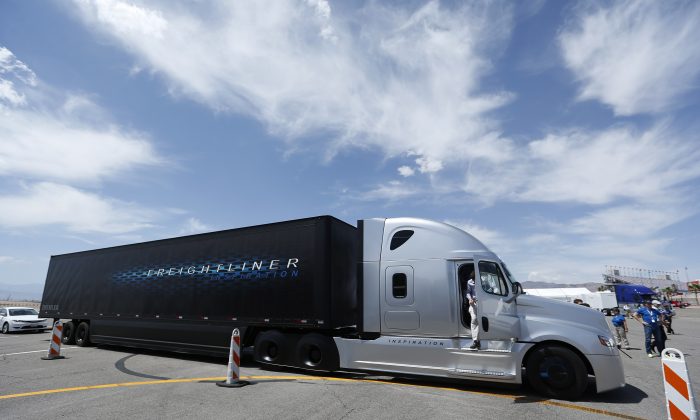 Why Truck Drivers Should Be Worried

The world’s first autonomous truck was recently rolled out under the watchful eye of the Nevada Trucking Association, which is concerned about the safety of the technology and the potential loss of human truck driver skills.

“We are watching it and we’re going to have to figure out the public policy to ensure safety and ensure that this technology works,” said Paul J. Enos, CEO of the Nevada Trucking Association.

He is excited about the new development of technology in his home state, but says it’s too early to tell whom the winners and losers might be. “It’s a game changer potentially, if they can prove that this technology works,” he said.

The world’s first autonomous 18-wheeler was introduced at the Las Vegas Motor Speedway on Tuesday, supported by Gov. Brian Sandoval, who released an official Nevada license plate for use of the new truck on public roads, according to NBC News.

German car manufacturer Daimler AG is behind the new innovation, and its American subsidiary Freightliner Trucks will test the new truck, dubbed Freightliner Inspiration Truck, on Nevada’s public roads. Daimler AG board member Wolfgang Bernhard sees a number of potential advantages to a driverless truck, including a fleet of trucks that have no humans on board.

But, drivers will still be needed in case of emergencies. Enos is worried that drivers could lose a valuable skill set.

“I’m worried about drivers losing the skill to move an 80,000 pound rig—and in Nevada it can go up to 129,000 pounds—and back it up, and getting that freight delivered in a safe, effective, efficient manner is a great skill set,” he said. “I’m afraid we can lose that as we move toward automation, and I’m worried about the security of the system.”

This hopeful and optimistic CEO recognizes that some drivers may have to be sacrificed in the face of developing technology. “We have had numerous things that have happened to our industry through the course of time that have impacted the trucking industry, especially our drivers,” Enos said.

He sees the potential for more freight to be moved with fewer drivers, but cautions that this is “probably a ways off.” Enos realizes that the evolution of technology could change things for drivers. “Do I worry about losing that asset of our 3 million drivers and that skill set that they have? Definitely.”

Right now the industry is having difficulty finding enough drivers to move freight. “We have a capacity crunch where that capacity is getting smaller and smaller to be able to get the freight moved that we need moved,” he explained.

In addition, Enos noted issues with meeting productivity demands due to freezes placed on the industry by the federal government. “Could our industry be more productive, could we move more? I think that is something that the shippers can immediately see a benefit.”

So the development of technology that could solve the production problem is encouraging to the trucking industry, but it may mean a few less drivers.

“It’s one of those double-edged swords. On the one hand we should reduce the cost of transportation of a product,” said Enos.

However, drivers will have the opportunity to develop new skills and receive a higher level of training. “It may mean that we have fewer drivers, but drivers get paid a lot more too because they are going to be more like a pilot,” he said, referring to drivers conducting safety checks on the trucks.

For the time being, drivers are still needed and Enos does not know whether drivers will be eliminated completely in the future or not.

He is sure of one thing though:

“I want to be very clear, drivers are our best asset in the trucking industry. Both from a business purpose, and when we’re talking about public policy and … truck drivers in this country are our biggest assets,” said Enos proudly.