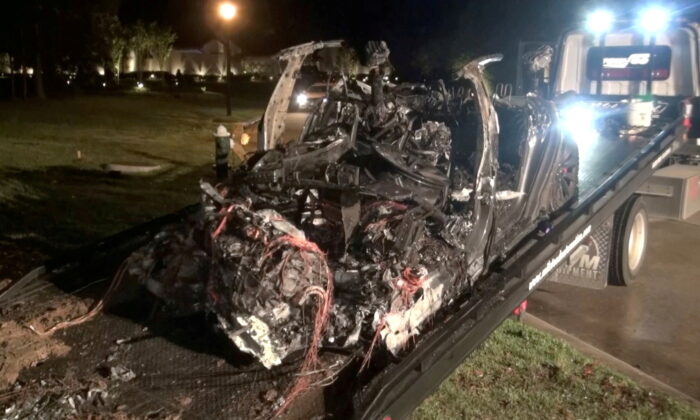 In this still image from video obtained via social media, the remains of a Tesla vehicle are seen after it crashed in The Woodlands, Texas, on April 17, 2021. (Scott J. Engle via Reuters)
US News

WASHINGTON—Safety officials investigating the cause of a Tesla Model S crash that killed two men in Texas last month said that testing suggested the vehicle’s automated steering system was “not available” on the road where the accident occurred.

But the car’s cruise-control function could still have been in operation, the National Transportation Safety Board (NTSB) said in its preliminary report on Monday.

The report drew no conclusions about the cause and circumstances of the fiery April 17 crash in a suburb of Houston. The NTSB and local police are still investigating.

Local police have said they believed the crash occurred with no one in the driver’s seat, raising questions about Tesla’s driver-assistance systems.

The accident has raised fresh questions about the safety of Tesla’s “Autopilot” system. Tesla Chief Executive Elon Musk said last month Autopilot could not have been engaged in the vehicle involved in the Texas crash.

The NTSB report makes clear that Autopilot is in fact two systems. One is a “Traffic-Aware Cruise Control” that controls the vehicle’s speed and distance from vehicles up ahead. The second is “Autosteer” which governs lateral steering movements. Both must be engaged for Autopilot to be considered in operation.

NTSB said its tests of a similar car at the crash location showed that Traffic-Aware Cruise Control could be engaged but that Autosteer was “not available on that part of the road.”

Autosteer assists within “clearly marked lanes” and is not always available. Tesla says on its website it plans an “upcoming” Autosteer release for use on city streets.

Tesla says Traffic-Aware Cruise Control matches a car’s speed to that of surrounding traffic, while Autosteer assists in steering.

Tesla and police in Texas did not respond to a request for comment.

The electric car maker said during an April 27 conference call to discuss quarterly results that a study with investigators showed Autosteer “did not and could not engage on the road condition” during the Texas crash.

The crash in Spring, Texas, killed the 59-year-old owner, William Varner, an anesthesiologist, and the passenger, aged 69.

The Tesla traveled 550 feet before departing the road on a curve, driving over the curb, and hitting a drainage culvert, a raised manhole, and a tree, the NTSB said.

It said the crash damaged the front of the car’s high-voltage lithium-ion battery case, where a massive fire started. The fire destroyed the car, including the onboard storage device, and NTSB released a photo of the charred remains of the vehicle.

In addition to the NTSB, the National Highway Traffic Safety Administration (NHTSA) is also investigating the crash. The NHTSA said on Wednesday it is opening a safety probe into a fatal May 5 Tesla crash in California.

NHTSA, the federal agency responsible for vehicle safety, said it previously had opened 28 special investigations into Tesla crashes, with 24 pending. At least four, including the fatal Texas accident, have occurred since March.

By David Shepardson and Hyunjoo Jin