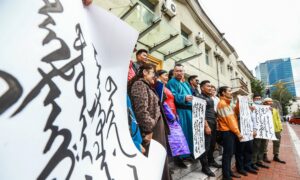 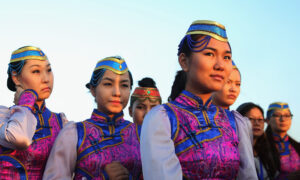 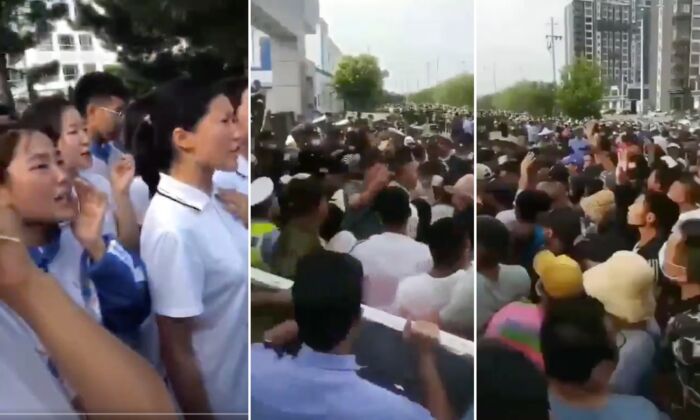 Mongolian students protest for the right to be educated in Mongolian language in Inner Mongolia, China, in August 2020. (Screenshot)
China Human Rights

A new policy in Inner Mongolia to mandate Mandarin Chinese-only teaching for some school grades and the phasing out of Mongolian as the language of instruction has sparked angry protests across the region in recent weeks.

Tens of thousands of students walked out of class and refused to return, while adults staged outdoor protests.

As authorities began making arrests of protesters, Inner Mongolia government documents revealed that local officials were being asked to suppress protests, while monitoring students and pressuring parents into forcing them to return to class.

At least four local Mongolians committed suicide in protest of the policy, according to media reports.

Meanwhile, Radio Free Asia obtained leaked documents showing that all staff at Inner Mongolia government offices or schools were required to send their children to school before Sept. 7. Otherwise, authorities would stop paying these staff their salaries and allowance. The non-compliant staff would also have to “self-review their faults.”

On Sept. 5, the government of Plain Blue Banner (also known as Shuluun Huh Banner) in Xilingol League—one of the 12 administrative regions of Inner Mongolia—announced that they suspended two officials who didn’t support the mandatory Chinese-language policy.

The post was quickly removed, but netizens saved the screenshot and shared it online.

Inner Mongolia is located in north-central China, with a 25.34 million population as of the end of 2018, according to the government statistics. 19.12 percent of them (about 4.8 million) are ethnic Mongolian.

Mandarin is the official dialect and language spoken by China’s majority Han ethnicity, while Mongols have their own spoken language and script. The new language policy sparked local fears that Mongols’ unique cultural identities would gradually be wiped out.

Soon, protests broke out. Local police issued wanted lists, seeking information on people who participated in local protests. Horqin district police in Tongliao city, for example, said it would reward informants with up to 1,000 yuan ($146).

And on Sept. 6, Linhe district police in Bayannur city announced that it detained five Mongolians who encouraged students to protest the policy on WeChat, a popular Chinese social media platform.

Nomin, a U.S.-based Mongolian activist, told Radio Free Asia that over 200 were arrested from Tongliao and Ordos.

Staff at a local state-run, Mongolian-language media outlet also protested the policy. A viral video showed staff at the Inner Mongolia Radio and Television signing their names and stamping their fingerprints along the outline of a circle—a popular way to avoid singling out any leaders. In the room, they hung up, a calligraphy painting that read, “[Communist] Party media bear the surname of the Party.”

The documents that The Epoch Times recently obtained were issued by the Xiangshan township government in Jarud Banner, Tongliao from Aug. 24 to Sept. 3.

They were daily reports on local ethnic Mongolian students, detailing how many Mongol students live in each village, whether they study at a primarily Mongolian-language school, how many students local teachers visited that day, and so on.

One document dated Aug. 26 said that officials should “maintain public security [a euphemism for suppressing dissent], maintain and control the education system, control public opinion [online and in society], and promote propaganda” about the language policy.

Should a protest occur, police must go there as soon as possible, the document stated. If protesters number more than 100, the government must dispatch forces from the “urban management” and “law enforcement” departments. Teachers from related schools should support the police, while organizers of the protests should be detained.

An Aug. 27 document stated that one official from the township government would be assigned to each of the 25 villages in town, and tasked with convincing students to return to school. Government officials, school teachers, and community officials must talk to all Mongolian families in the village one by one and report their attitudes toward Chinese-language education, the document stated.

Also, officials must monitor villagers’ conversations about the protests on social media platforms, such as WeChat, Weibo, and so on. “You must tightly control the public opinion, and must report immediately once you find anything wrong,” read the document.

Though ethnic Mongols make up a sizable portion of the local population, only a small percentage of school instructors are able to speak or understand the Mongolian language. In a document dated Aug. 27, township authorities stated that at one local middle school, only 28 out of 48 teachers were Mongolians, with only five who can speak Mongolian. At one local primary school, 33 out of 131 teachers were Mongolians, with only one who can understand and speak Mongolian.