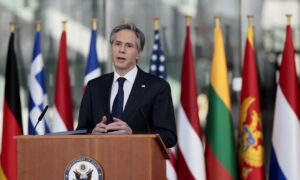 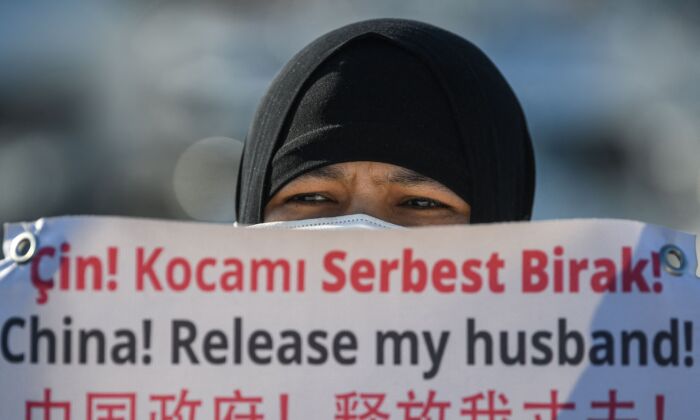 A Uyghur holds a sign asking the Chinese regime to release her husband at a parade near the Chinese consulate in Istanbul, Turkey on Feb. 22, 2021. (Ozan Kose/AFP via Getty Images)
Chinese Regime

The authenticity of a so-called French journalist was called into question after someone published articles on Chinese state-run media promoting the CCP’s propaganda about Xinjiang; a French newspaper has said the woman does exist but might be someone who blindly promotes the regime.

French-language fact-checking website RTL announced on April 5 that “Laurène Beaumond does not exist, at least not under that name,” after investigating reports on two Chinese state-run media as well as reports from two French independent newspapers.

Laurène Beaumond first appeared as a columnist on the Chinese state-run CGTN’s website on March 28, where she was described as an “independent journalist based in France, who has a double degree in history of art and archeology from the Paris-Sorbonne University (also known as Paris-IV) and a Masters in journalism. … [She] has worked in various editorial offices in Paris.”

Beaumond was revealed again at Chinese state-run China National Radio on March 31, in which she was presented as a “specialist in China with a passion about Asian literature and pop culture.”

French newspaper Le Monde reported on March 31 that there’s no journalist registered under the name “Laurène Beaumond” in France, and no media in Paris has hired a person with this name before. In France, all professional journalists need to register at la Commission de la carte.

Chinese foreign affairs ministry spokeswoman Hua Chunying claimed at her April 1’s press conference that the journalist is real and has a French citizenship. She refused to answer whether the name is an alias.

On April 2, the French newspaper Le Figaro reported that they found the journalist, a woman in her early 40s who lives in Sarthe, western France. “Laurène Beaumond is a pseudonym.”

The report said the woman did study at Paris-IV, and had some internship experience in some newspapers in France before she went to China. The woman said she didn’t do any fact-checking when she wrote the articles for CGTN.

Le Figaro didn’t reveal the real name of the woman. They said she worked in Beijing from 2011 to 2017 as “a translator, then a presenter on CCTV. Like many foreigners, she was working for state television under the strict control of censors.”

CCTV is a Chinese state-controlled broadcaster, and has a network of 50 channels broadcasting in six languages. In December 2016, CCTV separated its foreign language services into CGTN. Both CCTV and CGTN are part of the CCP’s propaganda system.

Le Figaro said the woman’s husband was from Urumqi, the capital city of Xinjiang, which is the reason she visited the city several times and visited some tourist sites in the region from 2011 to 2016.

The woman is afraid of being attacked but said she wouldn’t stop her cooperation with Chinese state-run media, and she wouldn’t use the name Beaumoud anymore, according to Le Figaro.

Le Figaro explained that the CCP’s propaganda system has a tactic, in which the regime packages some westerners as professional journalists or famous researchers, and uses their “testimonies” on media to counter the accusations and criticism from western countries.

The woman is one of the targeted westerners, the report said.

Speaking for the CCP

Laurène Beaumond’s article on French-language CGTN claimed that there were no concentration camps, no sterilization, no forced labor, no cultural erasure, nor genocide against Uyghurs in Xinjiang.

She even tried to create a harmonious scene in Xinjiang by saying “I have seen Han [Chinese native ethnic] people eat in Uyghur restaurants and vice versa.”

In fact, this description might reveal one of the CCP’s evil methods.

Uyghurs are Muslims for whom eating pork and drinking alcohol are strictly forbidden. In general, Muslims won’t eat at Han restaurants that serve pork and alcohol in China, especially when they are in Xinjiang and Ningxia Province where they can easily find a Halal restaurant.

The Chinese regime has forced Uyghurs to eat Han specialties—braised pork belly and pork trotters—at Han restaurants in Xinjiang, as a method of eradicating Uyghur customs and traditions, Bitter Winter reported on April 14, 2020.

The other claims that the French author made might not be the truth either.

In November 2019, the International Consortium of Investigative Journalists (ICIJ) published “China Cables,” after The New York Times revealed a series of Chinese government documents, both showed that the Chinese Communist Party had detained millions of Uyghurs and other minorities in Xinjiang in concentration camps.

In the past years, a large number of Uyghurs testified overseas about tortures they suffered in Xinjiang, which included forced sterilization, forced labor, not being able to follow religious rules and customs, and being detained inside concentration camps.

Other religious groups in China are suffering persecution as well.

A very large but unknown number of Falun Gong practitioners have been killed through the practice of forced, live organ harvesting, which some researchers have warned is a “cold genocide.”

At the Human Freedom Index 2020 that the U.S.-based Cato Institute and the Canadian Fraser Institute co-published in March, China’s freedom was ranked 129 out of a total of 162 countries (pdf).