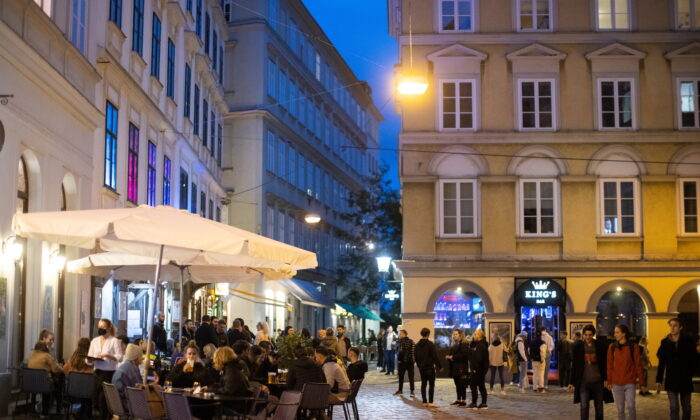 People enjoy an evening drink at Bermuda Triangle as cafes, bars and restaurants reopen after closing down for months amid the coronavirus disease (COVID-19) outbreak in Vienna, Austria, May 19, 2021. (Lisi Niesner/Reuters)
Europe

Austria Bans the Unvaccinated From Restaurants as COVID-19 Cases Surge

VIENNA—Austria said on Friday it is barring those not fully vaccinated against COVID-19 from cafes, restaurants, and hairdressers as infections approach the record set a year ago and the government struggles to convince holdouts to get the shot.

Roughly 64 percent of Austria’s population is fully vaccinated against COVID-19, in line with the European Union average but one of the lowest rates in western Europe. Many Austrians are sceptical about vaccines.

New daily infections have been surging and on Friday reached 9,388, close to the record of 9,586 set a year ago. The government said it expects a new record in the coming days.

“The evolution is exceptional and the occupancies of intensive-care beds are increasing significantly faster than we had expected,” conservative Chancellor Alexander Schallenberg told a news conference on the new measures that start on Monday.

These include barring the unvaccinated from hotels, events of more than 25 people and, importantly for a country that is a winter sports hotspot, ski lifts.

There will be a four-week transition period in which a first vaccination plus a PCR test will grant admission to places where the unvaccinated will be banned. After that, only the fully vaccinated and those who have recently recovered from a coronavirus infection will be let in.

Friday’s announcement comes a day after a similar move by the city of Vienna, which has the lowest infection rate among Austria’s nine provinces but the highest proportion of intensive-care bed occupied by COVID-19 patients at 20%.

While those dining out will have to show they have been vaccinated, the waiters serving them will not.

“One is a leisure activity undertaken voluntarily. No one forces me to go to the cinema or the restaurant. The other is my place of work,” Schallenberg said.