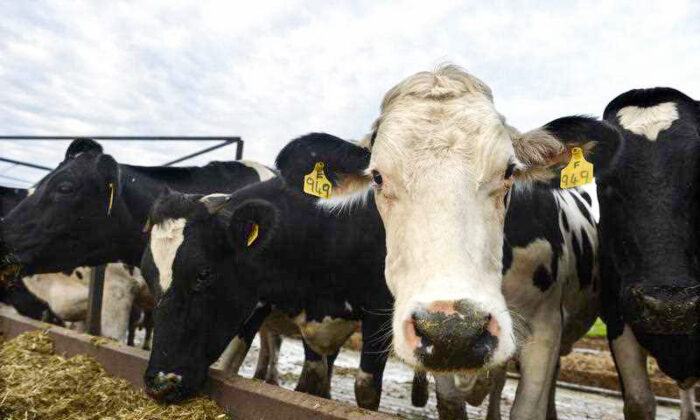 Cows eat out of a trough at a dairy farm on the Darling Downs, Queensland, Tuesday, May 21, 2013. (AAP Image/Dan Peled)
Australia

A native Australian seaweed shown to reduce methane emissions in cattle has seen its first commercial purchase by a South Australian meat processor just weeks after the global sale of the seaweed was announced.

CH4Global is one of three businesses licensed to sell Asparagopsis as a feed additive in Australia. The other two businesses are Sea Forest and SeaStock, according to the CSIRO website.

The red seaweed, Asparagopsis, native to Australian Coastal waters, has been shown to reduce methane production in ruminant livestock by up to 98 percent when added to feedlot rations, according to a report published by CSIRO and Meat and Livestock Australia.

The seaweed produces a bioactive compound called bromoform, which prevents the formation of methane by inhibiting a specific enzyme in the gut during the digestion of feed.

“This has far-reaching implications in the search for methods to alleviate the contribution of agriculture and more specifically livestock, to the global greenhouse gas inventory and subsequently climate change,” according to the report.

“Asparagopsis has a capability for the red meat industry in providing significant impact toward achieving the Meat and Livestock Australia (MLA) goal of carbon neutrality by 2030.”

Measurement Concerns and Effects of Asparagopsis

Measuring both the amount of asparagopsis consumed and the amount of methane reduced in cattle on a farm will be difficult, with the development of a range of tools and technologies for producers to cost-effectively reduce emissions and increase productivity underway, the managing director of Meat and Livestock Australia said, reported the ABC.

“The technology is in review at the moment by the Emissions Reduction Fund to be accepted by the government’s carbon credit scheme,” CH4 Australia general manager Adam Main told the ABC, adding that demonstrating environmental stewardship credentials could take the form of meat product marketing or carbon credits.

“We’re not relying on carbon credit schemes, but we think it will be part of the mix overall,” CirPro chief Smythe said. “There will have to be some auditing, and we will be making that information available through traceability tools.”

While research has pointed to the positive effects of incorporating Asparagopsis into cattle feedlots, such as a significant reduction of methane as well as increased profitability through weight gain, a key finding by the Meat and Livestock Australia was that the bioactive from Asparagopsis can be “unsafe” if consumed in high amounts.

“There is limited literature that reports on the effects of bromoform in animals, and those are based on studies in mice and rats,” according to the research paper (pdf).

“However, due diligence recommends continued monitoring and further necroscopy exploration as the feed inclusion periods get longer and/or the inclusion and intake levels are substantially increased, which may be the case in dairy systems.”