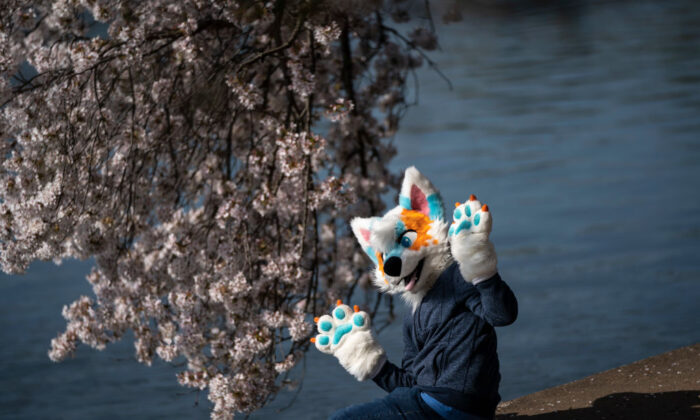 A person dressed as a "furry" sits under blooming cherry trees along the Tidal Basin on April 5, 2021 in Washington, DC. (Photo by Drew Angerer/Getty Images)
Australia

An Australian senator has spoken against an alleged incident where a Melbourne school girl identified as a cat, calling it a product of the woke culture getting out of control.

It comes after the Herald Sun reported on Aug. 21 that a private Melbourne school allowed a nonverbal but “phenomenally bright” girl to identify and behave as a cat, saying they have a “unique” approach to supporting students’ mental health.

“You got to school to learn reading, writing and arithmetic,” he wrote on Facebook on Aug. 21, sharing a screenshot of the report.

In a statement to The Herald Sun, the school did not confirm if the story was true but did say that they were dealing with students who were presenting ‘with a range of issues, from mental health, anxiety or identity issues.’

‘Our approach is always unique to the student, and we will take into account professional advice and the wellbeing of the student,’ the school said.

Not the First Case in Australia

This is not the first time Australia has heard about the issue.

In March, the Courier Mail reported that female students at an elite Brisbane private school who identify as cats or foxes were walking on all fours and cutting holes into their uniforms for tails.

“When a girl went to sit at a spare desk, another girl screamed at her and said she was sitting on her tail; there’s a slit in this child’s uniform where the tail apparently is,” a parent told the newspaper.

Meanwhile, Binary spokeswoman Kirralie Smith on Wednesday said in a post on the lobby group’s website that the trend is ridiculous.

“It is beyond comprehension that adults, whether they be parents or school staff, would go along with endorsing a child’s mental disturbance in this way,” she said.

“Children are not furry animals, and playing make-believe should be reserved for drama classes only. Nor can they change their sex. The children caught up in these kinds of fads need help, not ‘affirmation’ that their fantasy is real because it is not and never will be.”

The furry fandom is a subculture interested in anthropomorphic animals or animals with human qualities.

According to Furscience, a community studying the furry fandom, more than 75 percent of furries are under the age of 25, and use the behaviour for ‘self-expression’ and as a creative outlet.

“Approximately 84 percent of furries identify as male, 13 percent female, and 2.5 percent are transgender. Furries are predominantly (83.2%) white,” the website said.

However, the actual occurrence of mental health phenomena is rare. Respected Australian adolescent psychologist Michael Carr-Gregg told the Daily Mail that he had only come across one client who identified as an animal in his 25 years of practice.

Carr-Gregg said the individual was a young boy who identified as a dog. However, after the stressors in his life were removed, the boy went back to recognising himself as a human being.