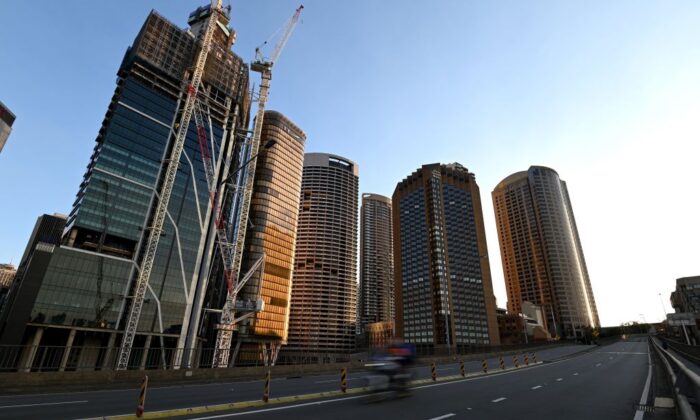 A man riding his bike through an empty Cahill expressway in Sydney, Australia on Aug. 14, 2021. (Saeed Khan/AFP via Getty Images)
Australia

The residential rental vacancy rate across Australia has fallen to a 16-year low as the country looks forward to the reopening of its international borders for tourists after two years of isolation.

SQM Research revealed rental vacancy rates fell sharply to 1.3 percent in January, a drop of 0.3 percent from December and 0.7 percent over the year.

Melbourne saw the greatest fall in vacancy compared to one year prior following the reopening of borders to international students in late-2021, sitting at 2.7 percent.

The rates in the capital cities of Canberra, Perth, Adelaide, Darwin, and Hobart remain below one percent, and Brisbane hovers above the mark at 1.1 percent.

This represents a return to normal long-term averages record prior to the pandemic and SQM Research expects further falls in CBD vacancy rates after more border restrictions are lifted and a slow return to working at an office continues.

In Sydney and Melbourne CBD markets, the hardest hit by closed border policies, the rental vacancy rate fell to 4.5 percent and 4 percent, respectively.

At its peak, Sydney CBD’s vacancy rate skyrocketed to 16.2 percent and Melbourne CBD’s soared to 10.8 percent.

The tightening rental market is being partly driven the low listing levels in conjunction with increasing constraints in the buyers’ market, such as affordability and borrowing policies, pushing people back to renting.

An acute lack of rental supply is also causing rents to surge across the country as competition for living spaces increases.

“We were expecting a drop in rental vacancies over January due to seasonality, however, the drops were larger than expected,” SQM Research Managing Director Louis Christopher said (pdf).

“And worse for tenants, the weekly rental listings in February to date have fallen further for our two largest capital cities.”

Christopher said it was very likely that rents could rise by more than 10 percent this year, another factor that will drive up already escalating inflation figures.

“Indeed, it could actually be much more than this as we are recording a rise in capital city combined rents of 5.2 percent just in the last 90 days,” he said.

Meanwhile, the landscape of the office market is in stark contrast, with the vacancy rate at 12.1 percent for the aggregate national level.

Property Council of Australia highlighted the “critical need” for governments and businesses to reinvigorate the nation’s CBDs.

“The missing piece of the puzzle now is the return of office workers, who are critical to the revitalisation of CBDs,” Property Council New South Wales Executive Director Luke Achterstraat said.

“It is critical for the livelihood of our CBDs that office workers are allowed to and encouraged to rediscover the energy and joys of working in our cities and with colleagues.