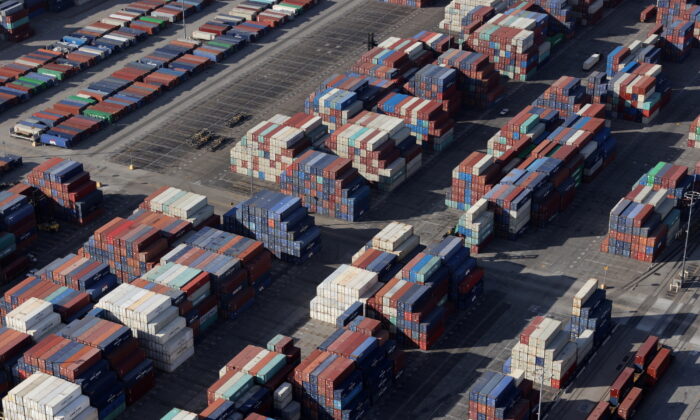 Shipping containers sit on the dock at a container terminal at the Port of Long Beach-Port of Los Angeles complex, in Los Angeles, Calif., on April 7, 2021. (REUTERS/Lucy Nicholson/File Photo)
Australia

Rebecca Zhu
Rebecca Zhu is an Australian reporter based in Sydney. She focuses on Australian economy, property, and education news. Contact her at rebecca.zhu@epochtimes.com.au.
View profile
Follow
biggersmaller
Print

The Australian consumer watchdog has begun an investigation into Australia’s rapid rise in shipping and container costs, which is beginning to cause price hikes in the retail sector.

The Australian Competition & Consumer Commission (ACCC) Chairman Rod Sims told The Australian that the investigation would focus on the price and movement of containers.

“We are aware of what’s going on with containers, and we are investigating it,” Sims said. “There is a limited amount I can say on it, but we are looking at the freight system—particularly the role that containers play, I can certainly say that, and that is certainly on the list of investigations.”

The skyrocketing cost of shipping has put pressure onto Australian importers by cutting into profit margins and forcing retailers, such as Breville, to begin passing on shipping costs to consumers, creating inflationary pressures.

The shortage of containers has been blamed on the supply chain disruptions in major Chinese ports that have partially or fully closed due to COVID-19 outbreaks.

The Freightos Baltic Index, which shows market rates for 40 foot or equivalent containers, illustrates the dramatic increase in prices over the last year, where it has increased by over five-fold.

However, there are some concerns that the shortage is also being caused by anti-competitive behaviour where prices are being artificially raised—another concern that the ACCC investigation will be looking into.

“I wouldn’t associate it with a particular accusation … but certainly we are aware of many complaints about containers, and we are investigating that,” Sims said.

Super Retail Group, which runs brands such as Supercheap Auto and Rebel, said retailers were being forced to order stock up to 12 months in advance.

“But even if you are buying it eight to twelve months out, the chances of it arriving on time is zero,” Super Retail Group CEO Anthony Heraghty told The Age. “If it’s not in the shed or on the shelf today, for Christmas this year, I think the chances of it being [in stock] come that peak time is incredibly remote.”

The Reserve Bank of Australia also addressed the issue of strained global supply chains, driven primarily by a global shortage of shipping containers, in a May statement.

They found that the manufacturing, retail trade, and wholesale trade had been the most impacted by the supply chain issues.

Rebecca Zhu
Follow
Rebecca Zhu is an Australian reporter based in Sydney. She focuses on Australian economy, property, and education news. Contact her at rebecca.zhu@epochtimes.com.au.