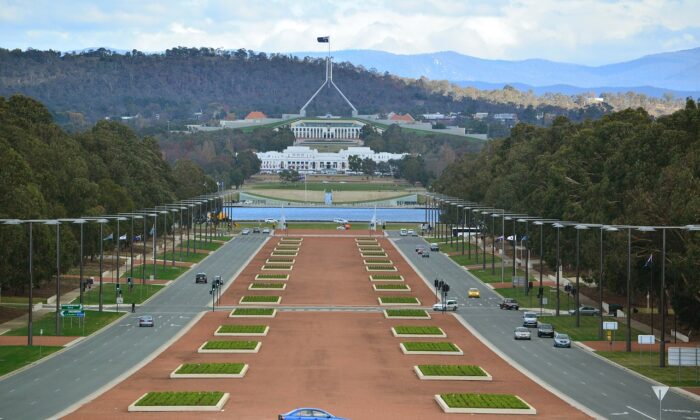 A view down Anzac Parade towards Parliament House in Canberra, in the Australian Capital Territory, Australia. (Patty Jansen/pixabay)
Australia

The Australian Capital Territory (ACT) has set a hard date for an end to the sale of fuel and diesel-burning vehicles.

The Labor-Greens-led ACT government will phase out internal combustion vehicles by 2035, and aim by 2030 (in just eight years) to have 90 percent of new car sales be of electric vehicles (EVs), with the details of the Territory’s Zero Emissions Vehicle Strategy expected in the coming days.

The ACT, which surrounds Canberra, is in many ways the vanguard of the green energy movement in Australia. It has set a net-zero emissions target by 2045, and says it currently is 100 percent powered by renewable electricity.

However, in 2020 the ACT admitted to SBS that the Territory only produces around five percent of its power grid needs and the rest is drawn from the National Energy Market (NEM), which is run on coal and gas. It then buys back the amount of power the region pulls from the NEM from neighbouring wind farms or other renewables sources in New South Wales, South Australia and Victoria to feed back into the NEM, offsetting its carbon use.

According to Shane Rattenbury, the ACT’s emissions reduction minister, around 60 percent of the territory’s emissions now come from transport, which is the target of the latest announcement.

“We need to be serious about starting to set clear goals, set timelines and give our community a clearer sense of what’s coming,” he told the Australian Broadcasting Corporation on July 18.

“We certainly expect so this is a transition that’s coming. There’ll simply be no new petrol vehicles being made. We’ve been very clear, we’re not talking about if you’re still driving around in your somewhat older second-hand petrol vehicle in 2035 [and] we’re going to suddenly pull you off the road.”

Rattenbury said it was about “beginning that transition” and making sure “we’re not making the problem worse as a starting point.”

The ACT has been the fastest jurisdiction in Australia to take up EVs, about twice the national average.

Several reasons contribute to this, including a swathe of government-backed incentives, as well as the nature of the ACT itself being the hub of the Australian Public Service. This means the population in general (approximately 430,000) is more educated (tertiary), younger compared to other states, and better paid—the capital Canberra competes with Sydney for the highest median housing price in the country.

However, the head of the Australian Automotive Dealer Association has criticised the move, warning it would have “adverse consequences” for the industry.

“Electric vehicles are currently more expensive, and at present, there is a distinct lack of choice in available makes and models. These factors may well change by 2035, but this ban has been foreshadowed in an environment where there is great uncertainty,” James Voortman, CEO of the Association, said in a statement.

“The big risk is that people hold onto their older, more polluting cars for longer, which will do nothing for reducing emissions.

“Rather than a crude ban on [internal combustion engines] ICE’s, the best way to lower emissions is to put a technology-agnostic CO2 standard in place so that manufacturers have a clear understanding of what they need to achieve and are given the freedom to deploy any technology to achieve that goal.”

He also said it was unclear how ACT authorities would enforce the ban and stop drivers simply buying petrol or diesel cars in other jurisdictions and then re-registering it in the Territory.

Rattenbury has said the ACT would work closely with the federal and state governments to develop a national system to stop individuals from re-registering petrol cars.

He also pointed to experts who have claimed that EVs will eventually drop in price and be comparable to regular cars in the “next three to four years.”

“Once you reach that point, there’s no reason not to buy an EV—they have lower running costs and lower maintenance costs,” he claimed.

The ACT has also earmarked an additional 50 charging stations in the jurisdiction and will push for a “good network of charging infrastructure” along major highways to other cities.

While battery technology is improving, the average maximum distance for an EV is still limited to within city limits, particularly considering the large Australian landmass.

A Tesla Model S (cost over A$100,000) is slated to be able to achieve a maximum 500 kilometre distance on one charge, while a Nissan Leaf (around A$50,000) can achieve 170 kilometres—this is without considering issues such as battery drain.

The ACT’s initiative comes as the federal Labor government grapples with skyrocketing electricity prices, forcing the national energy regulator to step in to ensure states have enough power in the winter months.