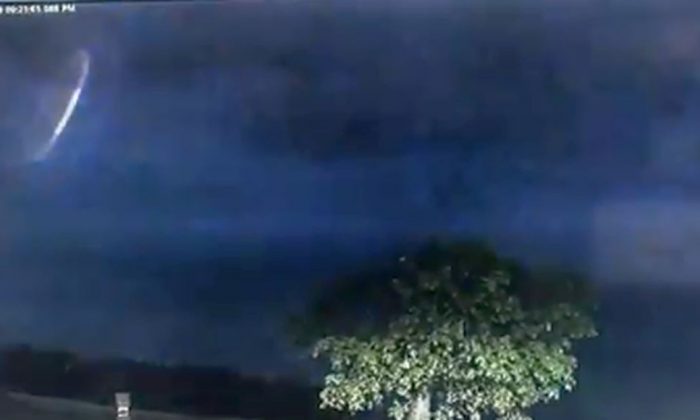 Police in Broome, Australia, shared unusual video footage that shows an object flying in the sky, and they’re not sure what it was.

“After reviewing CCTV at town beach of last nights storm, it appears we were not alone,” Broome Police tweeted, including emojis of flying saucers.

In the video, on the left side of the frame, an unusual white circular shape can be seen before it moves out of the picture.

After reviewing CCTV at town beach of last nights storm, it appears we were not alone 🔭🛸🛸🛸🛸 pic.twitter.com/Efh6SuPX7S

The footage was captured during a lightning storm, but the white object doesn’t appear to be lightning.

Users said that it was an alien spacecraft, but others were not so sure.

“A nice bit of video! How does this optical illusion occur? Refraction, reflection, ionosphere?” another person asked, the Daily Mail noted.

“It is an optical artifact caused by the internal reflection of light inside the glass elements of the lens,” said another. “It is caused by the car reversing in the bottom right corner. It mirrors its movements exactly.”

The person said, “Aliens probably exist, but this isn’t it.”

Earlier this month, a man in North Carolina, spotted a “pill-shaped” UFO.

Bret Harrison Jones, a photographer, was out with his camera when he saw the object coming in an out of focus in Guilford County, according to the Daily Mail.

The footage shows the shape in the distance, and Jones thinks that it was the size of a commercial aircraft or larger.

Jones, 34, said he was “blown away” by the finding, saying it appeared “otherworldly.”

Harvard Scientist Claims Interstellar Object May Be of Alien Origin

Harvard University Astronomy Department chair Avi Loeb recently defended his hypothesis that a strange object—the Oumuamua—found in the solar system might be an alien probe.

“As soon as we leave the solar system, I believe we will see a great deal of traffic out there,” Loeb told Israeli newspaper Haaretz.

“Possibly we’ll get a message that says, ‘Welcome to the interstellar club.’ Or we’ll discover multiple dead civilizations—that is, we’ll find their remains.”

Loeb, 56, and fellow researcher Shmuel Bialy published a paper saying that the object isn’t a comet or asteroid.

Due to its strange trajectory, it might be an artificial light sail, they claimed.

According to the report, the Search for Extraterrestrial Intelligence checked to see if the object emitted any radio messages or frequencies. However, none were found.

Loeb said he isn’t discouraged by the finding.

“I don’t care what people say,” he told the publication.

“I say what I think, and if the broad public takes an interest in what I say, that’s a welcome result as far as I’m concerned, but an indirect result. Science isn’t like politics: It is not based on popularity polls.”