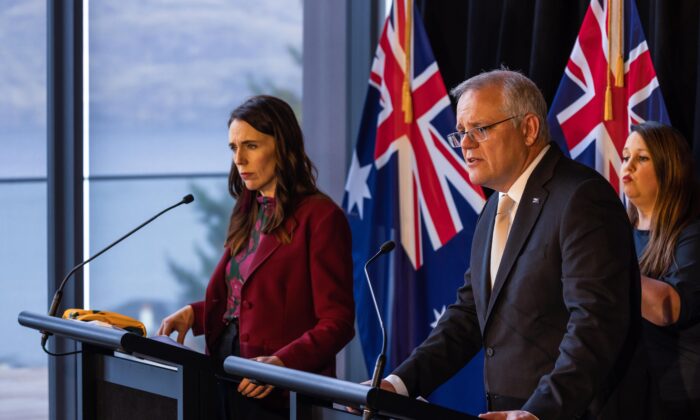 Australia, NZ Present United Front on China, Warning Against ‘Those Who Seek to Divide Us’

The prime ministers of Australia and New Zealand are presenting a united front on the issue of China, warning against actors seeking to divide the trans-Tasman allies by creating “points of difference” between them.

Australian Prime Minister Scott Morrison joined his New Zealand counterpart, Jacinda Ardern, at the Annual Leaders’ Summit in Queenstown to discuss a range of issues, including COVID-19, increased engagement in the Pacific, trade, and peace in the Indo-Pacific.

The leaders sought to assuage concerns of a division between the nations on their differing approaches to the China relationship.

“At no point in our discussions today did I detect any difference in our relative positions on the importance of maintaining a very strong and principled perspective on issues around trade, on issues around human rights,” Ardern told reporters at a joint press conference with Morrison in Queenstown.

“We have been broadly positioned on exactly the same place on these issues consistently.”

Morrison warned of actors who would “seek to divide us. They will not succeed.”

“I have no doubt there would be those who would seek to undermine Australia and NZ security, be seeking to create points of difference that are not there,” he said.

When asked about the possibility of military conflict in the Indo-Pacific region, Morrison said, “The world is being characterised by increased strategic competition between the United States and China; that is a self-evident fact.”

“But I would say, our shared view is that such strategic competition does not need to lead to increased likelihood of conflict or other pressures, whether they be coercion of any nature or interference,” he said. “What we both pursue, in the many ways we work together, is a free Indo-Pacific.”

The prime ministers followed up their talks with an extensive joint statement affirming the need to uphold sovereignty in an “era of increasing strategic competition.”

“The prime ministers reaffirmed their resolve and shared respective approaches to countering foreign interference and agreed the importance of building resilience across all sectors of society, including in education, infrastructure, research, electoral processes, media and communities,” it stated.

They also expressed concerns over Beijing’s increased militarization of the South China Sea and the takeover of Hong Kong.

On the weekend, New Zealand Trade Minister Damien O’Connor indicated that the Ardern government would join Australia’s barley dispute against China at the World Trade Organisation.

The Morrison government brought the action against China following its imposition of 80 percent tariffs on barley exports to the country. The Chinese Ministry for Commerce says the move was in response to Australia “dumping” barley into the China market; Australia disputes the claim.

The overt display of support from New Zealand comes in the wake of criticism of the Ardern government’s approach to China, which has been described as “too subtle” for international observers to notice.