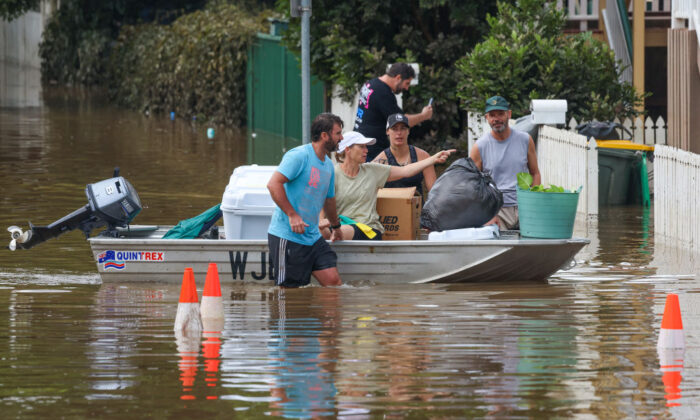 People use a boat to save their belonging from a flooded home at Torwood Street, Auchenflower in Brisbane, Australia, on March 3, 2022. (Peter Wallis/Getty Images)
Australia

The Australian Treasurer Josh Frydenberg has said while it was too early to figure out the price tag for cleaning up the current series of devastating floods judging from the 2011 Queensland flood disaster, the latest flood crisis could cost the Australian economy billions of dollars.

According to the federal treasurer, insurance claims from the affected areas reached $2 billion (US$1.4 billion), and industry sectors such as agriculture, mining, and tourism suffered more than $4 billion in economic damage.

“Every disaster is different, so I wouldn’t want to put a figure on it, but already 47,000 insurance claims have been lodged,” he told reporters in Canberra.

“It is unclear as to what the precise economic impact will be, but there will clearly be a big clean-up bill.”

Frydenberg said most of the insurance claims so far had come from Queensland and expected more claims to be filed in New South Wales (NSW) in the coming days.

At present residents in Queensland and northern NSW have made nearly 150,000 disaster support payment claims.

Government Services Minister Linda Reynolds said that the government had received 145,000 claims for emergency federal support, a one-off payment of $1,000 for adults and $400 for children, with 90,000 lodged on March 2.

Reynolds said the government had never seen such a number of claims in a flooding event before.

However, she would not elaborate on whether the payment, which has stayed the same since 2006, should go up.

“At the moment, that’s what it is,” she told ABC Radio National.

The minister confirmed that Services Australia, the government agency responsible for delivering a range of welfare, health and emergency supports, and other services, had transferred the payments to the bank accounts of 35,000 people and was working to keep up with demand.

Prime Minister Scott Morrison, who is currently in isolation after testing positive to COVID-19, said the government pre-positioned the defence force in Sydney and Nowra, where flash flooding was expected to occur.

The Australian Defence Force (ADF) has rescued 91 people during 36 missions in areas affected by floodwaters in Queensland and NSW.

“The ADF are highly active in assisting both response efforts and recovery and clean-up efforts, and there is much planning going on, on that front,” Morrison said on Facebook.

Meanwhile, Bridget McKenzie, the emergency management minister, has defended the government’s decision not to use the $4.8 billion emergency response fund yet.

She said the fund was set aside for future disastrous events expected in coming years and that the government had proposed $150 million toward flood reduction projects.

“We haven’t had to draw on (the emergency response fund) yet because we haven’t exhausted our other funding,” she told the Nine Network.

Nevertheless, Labor senator Murray Watt said none of the flood reduction projects funded by the government had begun construction, nor had any funding been channelled to disaster recovery.

Speaking to ABC radio, he said that it was the third disaster season since the fund’s establishment, and there had been a “shocking” deficiency of preparation for the types of floods Queensland and NSW were undergoing.

Watt also said that the government was distorting the amount of disaster money in the past three years by including the $13 billion pandemic support spent during the period.

“Certainly (COVID) is a disaster, but the fact that the government has to roll in COVID support payments to bump up their disaster support figures shows they haven’t done enough to support people recovering from natural disasters,” he said.

Nine people in Queensland and four in NSW have lost their lives because of the flooding so far.