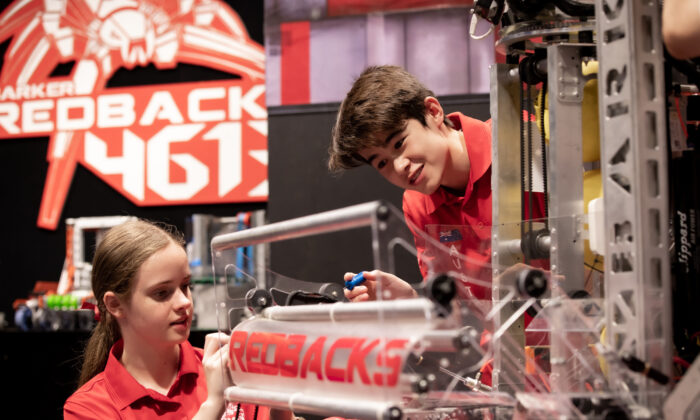 A group of students from Sydney’s Barker College are representing Australia at the world school robotics championships in Houston, Texas.

There are no science geeks at Sydney’s Barker College. Instead, the kids involved in the school’s robotics program are international hall of famers.

Rock stardom might be getting a little carried away.

Yet the opportunity to represent Barker on the world stage in competitions sponsored by the likes of Lucas Films, NASA, and Disney is worth every sacrifice, says Year 12 student Suzanne Brian who traded half her Christmas break to take part in this year’s schedule.

“I really don’t mind giving up my summer holidays … for something I’m really interested in,” she says.

“It [also means] spending time with my friends and it’s something I really enjoy.”

Suzanne and classmate Jack Wilson are this year’s recipients of the Paul A Allaire Medallion for outstanding leadership and personal character.

It’s not recognition bestowed upon them by the college, though. The pair are the latest bright young faces of FIRST, a worldwide robotics competition featuring almost 4000 teams from 34 countries.

On Wednesday they, as team captains, and 26 other Barker pupils flew out of Sydney for this year’s world championships in Houston, Texas.

And they’re not there just to make up the numbers.

Barker’s robotics program is ranked top 10 globally and its 2021 team was one of only two inducted into the FIRST Hall of Fame after taking out the prestigious Chairman’s Award.

The school’s journey to such heights began in 2013 when a handful of inquisitive kids discovered the events program hosted by FIRST and petitioned to be involved.

Two years later they formed The Barker Redbacks to compete at the Australian nationals and have been back every year since.
Asia-Pacific titles followed along with several earlier Chairman’s Award wins in Houston.

To get there this year, the Redbacks placed sixth overall in international qualifying but coupled with their technical excellence and outreach to other teams in sharing knowledge and skills, they again took home the Chairman’s gong as well as their Hall of Fame status.

“Deep in the philosophy of robotics is to share ideas and encourage the development of robotics in other schools and communities, especially those who are disadvantaged,” says college head Phillip Heath.

“Robotics programs now exist in other countries because of the support of the Barker Redbacks.”

They include four fledgling teams in Brazil and another in South Africa as well as several which required support in China, Qatar, Argentina and India.

Programs have also been set up at the Indigenous community school, Darkinjung Barker, at Yarramalong on the NSW Central Coast.

“The creativity, determination and ingenuity these young people demonstrate every year is not only commendable, they actually build up other people,” Heath says.

The program’s alumni also have a habit of returning to mentor the current crop while pursuing related careers at university.
Suzanne is convinced robotics is destined to be a big part of her personal future.

“It encompasses … not just engineering but medicine, art and all of those different areas,” she says.

“It’s replacing some jobs but others are coming through.”

She and Jack are both keen to study undergraduate mechatronics.

“They then learn about instructions in the middle school and more specific and complex tasks in the senior school.”

About 60 pupils come together each January to create and assemble the school’s latest-version robot from scratch, he says.

Their design needs to incorporate strategies to meet the challenge set by FIRST, which is always a sport and often resembles a traditional basketball or football game.

The team works during holidays and exclusively out of school hours, with dedicated coaches and mentors supporting them.

As part of the recognition for their success, Barker’s class of 2021 will next month be presented by Governor-General David Hurley with the FRC Hall of Fame Clock.

They are the second Australian team to win one in the award’s 30-year history.