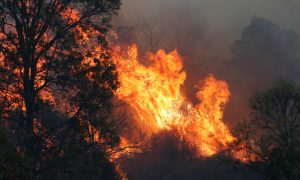 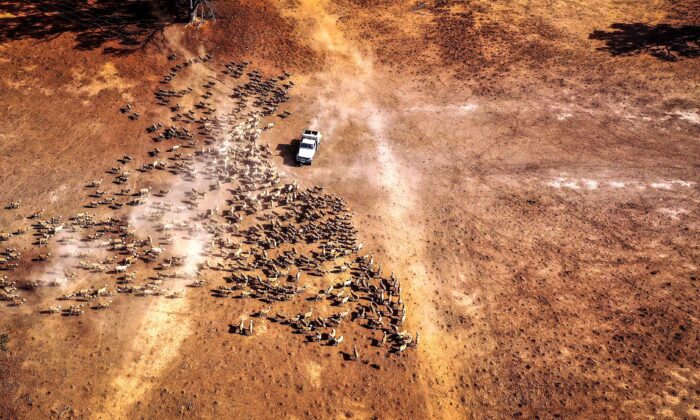 Australian farmer Richard Gillham drives his truck across a drought-affected paddock as he feeds his sheep on his property 'Barber's Lagoon' located on the outskirts of the north-western New South Wales town of Boggabri, Australia, on Oct. 4, 2019. (David Gray/Stringer/Getty Images)
Australia

Australia’s National Farmers’ Federation has given its new drought strategy to the federal government to clearly define responsibilities for the next drought.

While the full policy hasn’t been released publicly, the NFF’s heads said on Oct. 16 the document largely focuses on defining roles and responsibilities across all tiers of government when drought hits.

“This policy is not the panacea for this drought,” she told reporters in Canberra.

“This drought is unplanned and the actions of government are unplanned. That’s due to previous governments before them.”

The federation’s chief executive Tony Mahar said the framework would provide a rigorous assessment of what needed to be done during droughts.

Simson said a national drought policy was about making sure federal, state and local governments shouldered the burden of devastating dry spells.

“It’s something until now every government has shirked,” she said.

“So we congratulate the Morrison government on their willingness to embrace and approach this national drought strategy.”

The government has rejected calls from the NFF and others over lacking a national drought policy, pointing to measures it’s announced for present and future drought relief.

But critics say a more cohesive approach is needed to tackle the next inevitable drought.

In Question Time, federal treasurer Josh Frydenberg said drought was the “number one call” on the federal budget.

Labor pounced on his language, with opposition leader Anthony Albanese pointing out a range of social services, education, health, and defence programs with higher spends.

“This government is loose with the truth,” Albanese said.

The opposition also called on the prime minister to establish a drought “war cabinet.”

Albanese said the drought should be above politics but had a crack at the coalition while demanding a seat at their table.

“I certainly would welcome participation in a bipartisan way in dealing with the trauma which people in regional Australia and our farmers are suffering from,” he told reporters in Canberra on Wednesday.

“It’s a practical suggestion and the government doesn’t seem to have been able to come up with a strategy itself, so this is a practical way forward which we have suggested.”

Frydenberg said while the drought had stripped 0.25 percent off Australia’s gross domestic product, the government had injected “significant funding” into addressing the impact.

In both chambers of parliament, Greens politicians used Question Time to grill the government about the role of climate change in drought.

However, Andrew Pitman, director of the University of NSW’s Centre of Excellence for Climate Extremes, told the Sydney Environment Institute in June that there is “no link between climate change and drought.”

“That may not be what you read in the newspapers and sometimes hear commented, but there is no reason a priori why climate change should made the landscape more arid,” Pitman said.

“If you look at the Bureau of Meteorology data over the whole of the last one hundred years there’s no trend in data. There is no drying trend.

By Matt Coughlan and Daniel McCulloch. With additional reporting by Epoch Times staff.