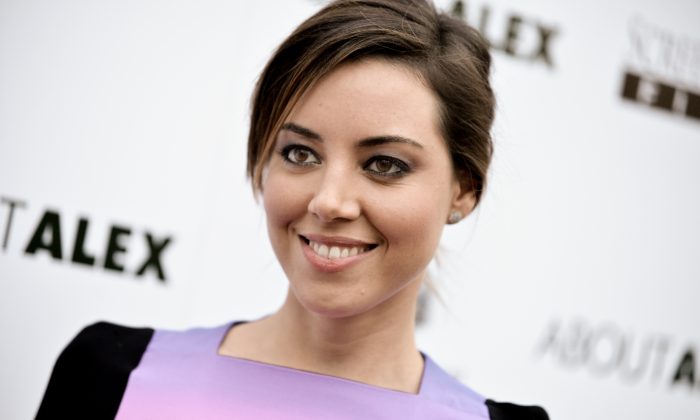 Aubrey Plaza arrives at the LA Premiere of "About Alex" held at the ArcLight Hollywood on Wednesday, Aug. 6, 2014, in Los Angeles. (Richard Shotwell/Invision/AP)
US

Aubrey Plaza appears to be one of the women who are victims of an expanding hack that has left hundreds of graphic images online.

Jennifer Lawrence, Kirsten Dunst, and Kate Upton are among the other victims.

Plaza, best known for her role in the hit comedy Parks and Recreation, appears to have had at least two pictures leaked. Both appear to show the actress in the bathroom.

The pictures have been spreading quickly with the help of users on 4Chan and Reddit.

The authorities, including the FBI, are investigating the case and trying to find the person(s) behind the hack.

The situation apparently started after an iCloud security issue allowed access to celebrity phones through a hack.

While a number of celebrities or their representatives have commented on the leak, Plaza has not so far.

The FBI said Monday it was addressing allegations that online accounts of numerous celebrities, including Oscar-winner Jennifer Lawrence, had been hacked, leading to the posting of their nude photographs online.

“This is a flagrant violation of privacy,” Lawrence’s publicist Liz Mahoney wrote in a statement. “The authorities have been contacted and will prosecute anyone who posts the stolen photos of Jennifer Lawrence.”

The FBI said it was “aware of the allegations concerning computer intrusions and the unlawful release of material involving high profile individuals, and is addressing the matter.”

“Any further comment would be inappropriate at this time,” spokeswoman Laura Eimiller wrote in a statement.

Apple Inc. spokeswoman Natalie Kerris said the company was investigating whether any iCloud accounts had been tampered with, but she did not give any further details.

“We take user privacy very seriously and are actively investigating this report,” she said.

“To those of you looking at photos I took with my husband years ago in the privacy of our home, hope you feel great about yourselves,” Winstead posted on Twitter. Winstead, who starred in “Final Destination 3” and “Abraham Lincoln: Vampire Hunter,” wrote that she thought the images had been destroyed.

“Knowing those photos were deleted long ago, I can only imagine the creepy effort that went into this,” Winstead wrote.

Bryan Hamade aka BluntMastermind the Hacker Behind the Nude Pictures Leak?