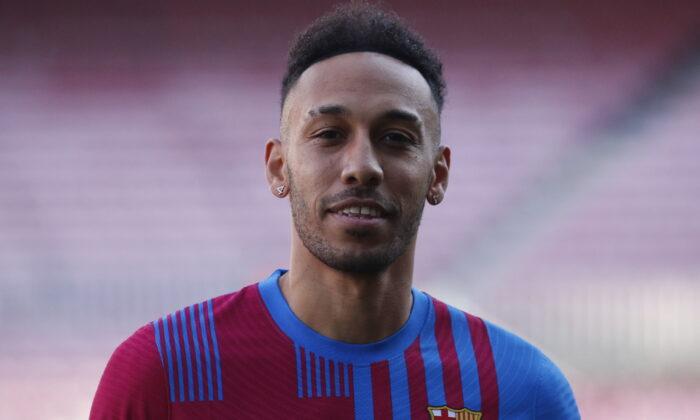 Aubameyang Assaulted in Armed Robbery at His Home in Barcelona

Armed robbers broke into the home of Barcelona striker Pierre-Emerick Aubameyang early on Monday morning, police said, and physically assaulted the player and his wife as they forced them to open a safe to steal jewelry, according to media reports.

Spanish newspaper El Pais said both the player and his wife Alysha Behague suffered minor injuries. Aubameyang, 33, has not confirmed any details of the robbery.

It is the second time in the last two months that Aubameyang’s home in Castelldefels, a suburb in the Metropolitan Area of Barcelona, has been burgled, although the player and his family were not at home during the first break-in, police said.

According to media reports, four hooded men broke into his home on Monday and threatened the player and his family with firearms. They struck Aubameyang and his wife and forced them to open a safe in order to steal jewelry.

It is not the first time Europe’s top flight players have been victims of robberies. In December, Manchester City defender Joao Cancelo was assaulted at his home in England, and Benfica defender Nicolas Otamendi was attacked during a robbery at his home in Portugal.

In Barcelona, the homes of Gerard Pique, Ansu Fati, Jordi Alba, Samuel Umtiti, and Coutinho have been robbed during games, according to police.

Similar incidents have also been reported among players in Madrid, Seville, and Valencia.