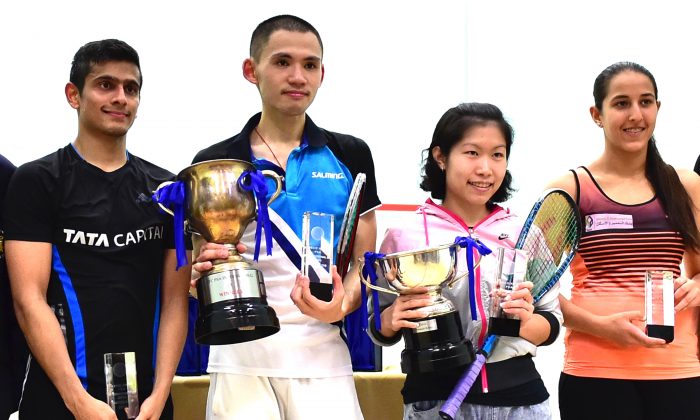 Sixteen internationally ranked competitors took part in both the men’s and women’s competitions leading to some excellent high quality matches, particularly as the event progressed. Outstanding players that have been on the circuit for some time included the top four Hong Kong professionals Annie Au, Joey Chan, Max Lee and Leo Au along with Saurav Ghosal, Harinder Pal Singh Sandhu and Jashana Chinappa of India, Jenny Duncalf, Tom Richards and Joe Lee of England, Laurens Jan Amjema of Netherlands, Rex Hendrix of Australia, Delia Arnold and Nafizwan Adnan of Malaysia and James Huang of Taiwan.

Men
In the men’s draw second seed Saurav Ghosal of India, seemingly on top of his game, had a clear run through to the final in the lower half of the draw beating his fellow countryman Harinder Pal Singh Sandhu, Nafizwan Adnan of Malaysia and Laurens Jan Amjema of Netherlands successively in straight games to reach the final.

In the top half of the men’s draw top seed Max Lee of Hong Kong also prevailed with straight game wins over James Huang of Taiwan, Omar Abdel Maguid of Egypt (Semi-final) and a tough five set encounter with Tom Richards of England in the quarter final with two games going to 15-13 and 16-18 points. Lee also had a hard 3rd game against Huang in the first round with the deciding 3rd game finishing 18-16 in Lee’s favour.

This set up a much awaited final between the two top players and a fine match it was. Many long back of the court rallies with each player trying to sap the strength out of the other followed by some exquisite boosts and front wall drop shots and some amazing retrieving. Ghosal took the first game but Lee came back to take the second and then continued to win the next two game to take the title.

Naturally Ghosal was disappointed to lose the final after play so well in the tournament.

“I am just disappointed I did not win today but Max did well on the crucial points and especially in the third game he played really well. So I am just very disappointed”.

Asked about his change of shots from the previous matches, he replied
“You have to play differently against different people and I guess my touch at the front was not as good as yesterday but not every game is the same so you have to adapt accordingly.

Asked if he picked up an injury, he explained
“At the end of the second I went to pick up a ball on the back forehand and I think I pulled it a little bit on the top of the shoulder. It’s just unlucky for me but I can’t use that as an excuse.

“Physically I was fine it was just with my shoulder made me struggling a little bit, but lungs and legs wise I was fine. We all train for something like this.

Lee set out his thoughts to Epoch Times after the match.

“I thought it was clean squash. It was good to get a positive start in the second game, I tried to be more positive, some shots were going to the nick and I tried to keep my mind clear and just concentrate on every shot, focus on every swing, keep it simple. I know he [Ghosal] is such a good player, good solid running around, a good shot player. I just have to be careful each shot, hang in there and hang in there and when there is space ….attack. Occasionally I have to lob the ball over him, at the back he has got lots of advantages he takes the volley all of the time so I have to try to hit low and hard to pass him. But overall it was a great match”.

Women
In the women’s draw a new youngster from Egypt, 15 year old at the start of the tournament, Habiba Mohamed took the lower half of the draw by storm, with powerful shots, she overpowered qualifier Ho Tze Lok, then took out second seed Rachael Grinham 11-7, 12-10, 11-7 to play 3rd seed Jenny Duncalf of England in the semi-final. Mohamed defeated Duncalf 11-9, 11-9, 11-3 to move into the final. Mohamed now 16-years old was presented with a birthday cake after her semi-final match on Friday May 29.

“I am really happy to play here in Hong Kong for the first time and for sure I will come next year. I would like to thank all of the organizers, and all of the people that watch us. Especially for yesterday’s surprise [birthday cake], it made me very happy. It’s amazing, they really made my day. I like the weather here and everything. Habiba has been playing since she was 6 ½ years old. “All I am thinking about is just to improve my ranking”.

In the top half of the draw top seed Annie Au had a tougher fight to the final. Although beating Carmen Lee in three straight games, her quarter and semi-final matches were more difficult. Au overcame fellow Hong Konger Joey Chan then came through a close four game match with Joshana Chinappa of India in the semi-final. Au lost the first game 9-11 but took a close second game 10-12 amidst many umpiring decisions against Chinappa which although she kept a cool head, distracted her attention. The umpiring inconsistencies continued in games 3 and 4 which Au won 11-6, 11-9 to move her into the final.

The final between Au and Mohamed was a high quality 5-game match. Au won the first game 11-7. Although Mohamed has a good all-round game she is still a little bit short of finesse at the front of the court. Her big advantage at present is her powerful forehand which she used to devastating effect taking the next 2-games 8-11 and 9-11. But Au’s experience in dealing with players with different playing characteristics enabled her to come back to take the next 2-games 11-4, 11-8 to win the title.

“I am really happy as it is my first title this year” said Au. “I think I can see my fitness improve a lot because I have played three hard matches.

“In the game today I lost concentration a bit in the second and third games but I am happy that afterwards I was able to come back and play a bit better. I think everyone knows that Habiba is an up and coming player, she is a really good youngster, a strong player so I am really happy to beat her in the final.