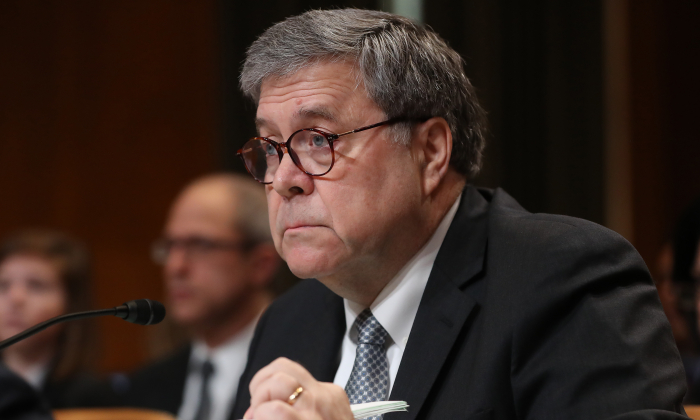 Attorney General William Barr plans to release the long-awaited final report by special counsel Robert Mueller on April 18, according to the Justice Department.

Mueller investigated allegations of collusion between the Trump campaign and Russia to interfere in the 2016 election. The special counsel concluded there is no evidence of collusion.

Department of Justice spokeswoman Kerri Kupec said the report will be released to Congress and the public on the morning of April 18. Barr previously said the report is nearly 400 pages long.

Since releasing a top-line summary of the report on March 24, Barr has been working with Mueller to black out portions to protect grand jury testimony, ongoing investigations, sources and methods, and damaging information about people who were not ultimately charged with a crime. The different categories of redactions will be color-coded in the final report, Barr told lawmakers.

Throughout the entire duration of Mueller’s investigation, Trump denounced the probe as a hoax. The president again slammed the investigation moments before the Justice Department revealed the release date for the final report.

“The Mueller Report, which was written by 18 Angry Democrats who also happen to be Trump Haters (and Clinton Supporters), should have focused on the people who SPIED on my 2016 Campaign, and others who fabricated the whole Russia Hoax,” Trump wrote.

“That is, never forget, the crime … since there was no Collusion, why was there an Investigation in the first place! Answer – Dirty Cops, Dems and Crooked Hillary!”

Moments after the department announced its plans for releasing the report, the president went to Twitter to make another attack on Mueller’s team and deride the “Russia Hoax.” The Mueller investigation has cast a cloud over the administration; Trump has often called it a politically motivated “witch hunt.”

Mueller ended his 22-month inquiry on March 22, handing Barr a confidential copy of the report. Two days later, Barr summarized Mueller’s conclusions in a four-page letter. Mueller didn’t make a determination on the obstruction charges against the president. Barr and Deputy Attorney General Rod Rosenstein examined the evidence presented and determined that it’s insufficient to bring a case to trial.

Barr has been under pressure from Democrats to release the full report, without redactions. Barr, a Trump appointee, has pledged to be as transparent as possible.

Since Barr released his letter, Trump has set his sights on the FBI and accused the Obama Justice Department of spying on his campaign. The attorney general told lawmakers he believed that spying on Trump’s campaign did occur, and that he plans to investigate whether it was legally justified.

“I think spying did occur,” Barr said. “But the question is whether it was adequately predicated.”

The FBI investigators obtained a spy warrant to monitor former Trump-campaign associate Carter Page. The core of the evidence the bureau used consisted of information from a dossier compiled by a foreign spy and paid for by the Clinton campaign and the Democratic National Committee.