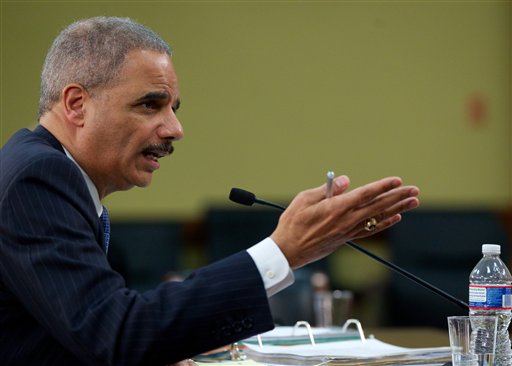 Attorney General Eric Holder testifies on Capitol Hill in Washington in April. The Justice Department has secretly obtained two months of telephone records of journalists for The Associated Press in what AP's top executive says is an unprecedented intrusion into newsgathering. (AP Photo/Molly Riley, File)
US

The Associated Press revealed on May 13 that it had two months of telephone records of reporters and editors seized by the Justice Department, gathering information that the CEO of the media outlet said the government “has no right to know.”

Gary Pruitt, the CEO, also said the secret rec0rd-seizure was a “massive and unprecedented intrusion” into how news organizations gather the news.

As part of an already scheduled oversight hearing on May 15, Attorney General Eric Holder will have to answer questions about the record-taking.

“Any abridgement of the First Amendment right to the freedom of the press is concerning,” said Bob Goodlatte (R-VA), the House Judiciary Committee chairman.

Committee members “will thoroughly investigate this issue and will also ask Attorney General Eric Holder pointed questions about it at Wednesday’s oversight hearing,” he added.

U.S. Senator Patrick Leahy, (D-Vt), the chairman of the Senate Judiciary Committee, said in a statement that he’s “very troubled” by what happened.

“The burden is always on the government when they go after private information–especially information regarding the press or its confidential sources,” Leahy said. “I want to know more about this case, but on the face of it, I am concerned that the government may not have met that burden.”

The White House has declined to answer questions about the probe, referring them to the Justice Department, which White House spokesman Jay Carney said acts independently in these matters.

Reince Priebus, chairman of the Republican National Committee, said that Attorney General Holder should resign over the record taking, saying that Holder has “trampled on the First Amendment” by using secret subpoenas to “spy” on the Associated Press.

The American Civil Liberties Union has called for an explanation behind the record seizures.

“The media’s purpose is to keep the public informed and it should be free to do so without the threat of unwarranted surveillance,” said Laura Murphy, director of the American Civil Liberties Union Washington Legislative Office, in a statement. “The Attorney General must explain the Justice Department’s actions to the public so that we can make sure this kind of press intimidation does not happen again.”

In the letter notifying the AP, which was received May 10, the Justice Department offered no explanation for the seizure, according to Pruitt’s letter and attorneys for the AP. The records were presumably obtained from phone companies earlier this year although the government letter did not explain that. None of the information provided by the government to the AP suggested the actual phone conversations were monitored.

The record seizures could be over a May 7, 2012 story about a failed terror plot in Yemen, which relied on confidential sources.  Five editorial staff involved in reporting the story were among those that had phone records taken.

Bill Miller, spokesman for the U.S. Attorney’s Office for the District of Columbia, said in an emailed statement: “We take seriously our obligations to follow all applicable laws, federal regulations, and Department of Justice policies when issuing subpoenas for phone records of media organizations. Those regulations require us to make every reasonable effort to obtain information through alternative means before even considering a subpoena for the phone records of a member of the media. We must notify the media organization in advance unless doing so would pose a substantial threat to the integrity of the investigation. Because we value the freedom of the press, we are always careful and deliberative in seeking to strike the right balance between the public interest in the free flow of information and the public interest in the fair and effective administration of our criminal laws.”

Note: The hearing will start at 1:00 p.m. on May 15, and will tkae place in 2141 Rayburn at the House Office Building in Washington, D.C. It will be webcast live here.