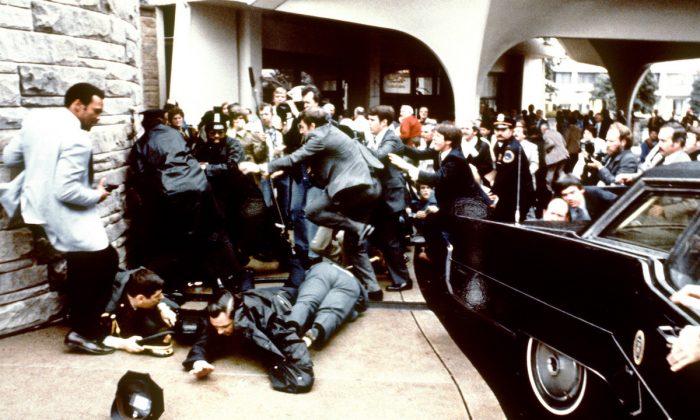 Police and Secret Service agents reacting during the assassination attempt on then US president Ronald Reagan, after a conference outside the Hilton Hotel in Washington, D.C. on March 30, 1981. (just behind the car). Reagan was hit in the chest and was hospitalized for 12 days. Hinckley was aquitted 21 June 1982 after a jury found him mentally unstable. (Mike Evens/AFP/Getty Images)
Crime and Incidents

John Hinckley Jr., who tried to shoot and kill former President Ronald Reagan 41 years ago, was fully released from court oversight on Wednesday.

“After 41 years 2 months and 15 days, FREEDOM AT LAST!!!,” the would-be presidential assassin wrote on Twitter at around 12 p.m.

It was long expected that Hinckley would be released. U.S. District Court Judge Paul L. Friedman in Washington previously said Hinckley would be freed on June 15 if he continued to remain mentally stable in the Virginia town where he has lived for several years.

In the early 1980s, Hinckley was acquitted by a jury by reason of insanity but has spent decades in a Washington-area mental hospital.

“If he hadn’t tried to kill a president he would have been released unconditionally a long time ago,” Judge Friedman previously said. “I am confident that Mr. Hinckley will do well in the years remaining to him,” the judge said in a June hearing.

Other than trying to kill Reagan, Hinckley also shot and injured then-White House press secretary James Brady, as well as a Secret Service agent, and a Washington police officer. Due to the shooting, Brady suffered long-term health issues and died in 2014 before his death was ruled a homicide, although no additional charges were pursued against Hinckley.

Friedman also recently said, “In 1981, over 40 years ago, John Hinckley was a profoundly troubled young man. He had acute psychosis. … He began to stalk the president. The president [at the time] was Jimmy Carter. He never got close to Jimmy Carter. But he did get close to Ronald Reagan.”

“Contrary to the judge’s decision, we believe John Hinckley is still a threat to others and we strongly oppose his release,” the foundation said. “Our hope is that the Justice Department will file a motion with the court leading to a reversal of the decision.”

Hinckley had been living full-time in Virginia since 2016 with restrictions including: allowing officials to access electronic devices, email, and online accounts; being prevented from traveling to areas where he knows there will be an official or family member protected by U.S. Secret Service; and giving notice if he wants to travel more than 75 miles from his home.

Hinckley was 25 when he carried out the attack and was reportedly attempting to seek the attention of “Taxi Driver” actress Jodi Foster. When jurors rendered their decision, they said he was suffering from severe mental problems and declared he required treatment and not life in prison.