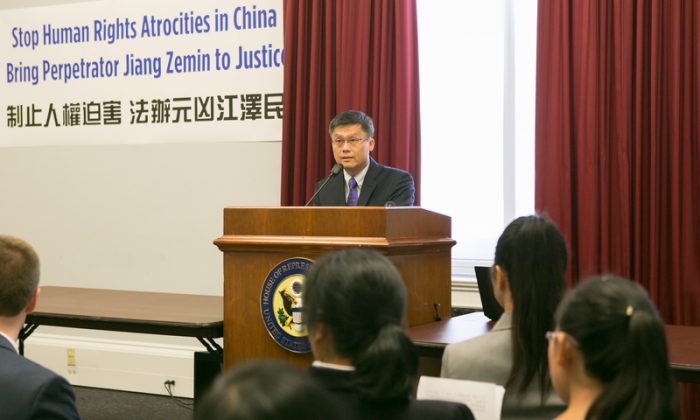 WASHINGTON—The persecution of Falun Gong in China, launched by communist leader Jiang Zemin in July 1999, has persisted for 16 years. Now, there are signs that its political foundations are on increasingly shaky ground. A movement that aims to bring Jiang to justice for his role in leading the campaign is gathering momentum, and the Falun Gong community hopes that it will eventually result in the criminal prosecution of Jiang for his role in the attempted destruction of the group.

Friends and supporters of persecuted Falun Gong practitioners as well as congressional staffers participated in a forum on Capitol Hill, Sept. 15, to inform members of Congress, the press, and the public of the status of the movement and its objectives.

“Over 178,000 Falun Gong practitioners and their family members filed criminal complaints—lawsuits—against Jiang Zemin, former head of the Chinese Communist Party (CCP), between the end of May and September 14, 2015. They urge the Supreme People’s Procuratorate in China to bring Jiang to justice for orchestrating the persecution of Falun Gong,” said Frank Lee, the spokesman for Falun Dafa Practitioners Association in Washington, D.C.

The plaintiffs are from mainland China and 27 other countries. Among them, 3,495 became handicapped or had family members tortured to death; 22,287 were incarcerated in forced labor camps or prisons; and 54,449 were held in detention centers or brainwashing centers.

The snowballing of lawsuits all became possible when certain provisions of China’s Supreme People’s Court took effect on May 1. Courts could now accept written complaints without exception, and the legal right to sue would now be protected, at least on paper. These complaints cannot be automatically dismissed as they were in the past. Consequently, lawsuits against Jiang Zemin have shot up.

Through our lawsuits against Jiang Zemin, we hope to persuade others involved in the persecution to stop carrying it out and choose the right side of history.
— Frank Lee, Falun Dafa Practitioners Association in Washington, D.C

Jiang is the focus of the legal action because he was the initiator of the persecution, directing the annihilation of Falun Gong in 1999, when other members of the leadership either opposed or didn’t support it.

“The reason for the lawsuits is to raise awareness of the persecution and bring it to an end. Through our lawsuits against Jiang Zemin, we hope to persuade others involved in the persecution to stop carrying it out and choose the right side of history,” said Lee.

Lee said that those who filed the complaints in mainland China and used their real names and addresses, were risking their personal safety in order to raise awareness of the persecution and to bring Jiang to justice. “Their acts are selfless and courageous,” he said.

Over the past three years, since Xi Jinping assumed power, many of Jiang’s key lieutenants have been purged. Many of those officials, including Zhou Yongkang, Li Dongsheng, and others, played key roles in the anti-Falun Gong campaign. Negative news reports about the 610 Office, the secret Party task force set up to direct the persecution, have also emerged this year; and the agency appears to have been without an announced leader for several months.

The lawsuits involve another actor: human rights attorneys. Preparing the legal actions has required practicing lawyers, and often those who defend Falun Gong end up being persecuted and tortured themselves.

Hugo Peng, formerly an attorney who defended Falun Gong practitioners in China, said through an interpreter: “Human rights lawyers embrace the noble ideal of the ‘rule of law’ so that they are willing to stay the course and fight to the finish, even to their death, to safeguard the dignity of the laws and rights of the average citizen.”

The Falun Gong Movement is a real rescue movement, spreading from person to person, heart to heart, to work toward changes in the global scope.
— Hugo Peng, Rights Protection Lawyers in China

“Unfortunately, the CCP has proven that no matter how hard people try … all their efforts cannot truly offset the devastation wrought by the CCP,” Peng said.

Frank Lee said, “We are also using these lawsuits to give Chinese who were deceived by the Chinese Communist Party’s propaganda a chance to understand what Falun Gong is really about. For those that have joined in the CCP’s persecution for personal gain or under the guise of ‘following orders,’ we want to give them a chance to stop and make up for the losses they caused. We want to let them know that they are persecuting innocent people, and want to remind them that one day they will have to take responsibility for what they’ve done.”

Zhang Huidong, a former business executive in China, gave testimony of his journey from Dalian, China, to escaping to the United States. One morning in August 2001, police came to his home because he practiced Falun Gong, slipped a rope around his neck, and pulled it so tight that he passed out. When he woke up, he found himself handcuffed, in the Dalian police station, where he was interrogated and physically abused.

From the ordeal, Zhang suffers a lifelong disability, and initially had to use a wheelchair or crutches to get around. However, after he resumed practicing Falun Gong he recovered his ability to walk, though with difficulty.

Two practitioners from the Washington, D.C., area, who had been abused and tortured, provided written testimony at the forum.

“I was illegally arrested four times after the persecution of Falun Gong began in 1999,” wrote Ma Chunmei, a practitioner now living in America. “I spent over four years in the Heizuizi Labor Camp in Jilin Province. While there, I was subjected to various types of torture such as: brainwashing, forced labor, sleep deprivation, and force-feeding. I almost lost my life. My husband was forced to divorce me. I became homeless in China and managed to escape to Thailand in 2006. More than 10 friends of mine have been killed in the persecution.”

We are also using these lawsuits to give Chinese who were deceived by the Chinese Communist Party’s propaganda a chance to understand what Falun Gong is really about.
— Frank Lee, Falun Dafa Practitioners Association in Washington, D.C.

Wang Chunrong, who was an accountant and head of an accounting firm, wrote that she suffered physical, mental, and financial persecution.

“In order to speak out for Falun Gong, I was arrested three times, had my home raided three times. Whether the police station, detention center, Masanjia Forced Labor Camp, or Liaoning Province Women’s Prison, they took me, they detained me, and treated me as a prisoner,” Wang wrote.

“Suing Jiang is an opportunity for the Chinese people to split with the Party and thus have a future. To this end, I hope that more people of conscience will sue Jiang and expose how Jiang Zemin used the Party to harm morality. I hope this way the Chinese people can recover their kindness and pure nature, and welcome a better tomorrow.”