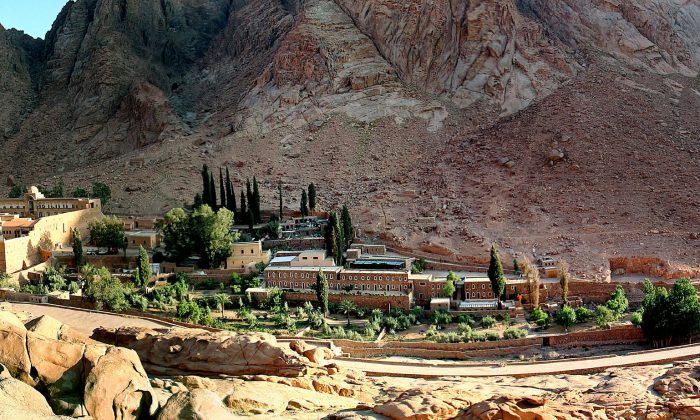 A general view of the Saint Catherine's monastery (far left) with its living and tourist facility in the Sinai peninsula of Egypt on May 18, 2005. (REUTERS/Aladin Abdel Naby)
International

Gunmen attacked a police checkpoint several hundred meters from the church entrance. No one has claimed responsibility.

The attack comes just 10 days before Pope Francis is scheduled to visit Egypt and just over a week after two deadly suicide bombings on Christian churches, claimed by Islamic State, plunged the country into mourning and marked one of the bloodiest days for the country’s Christian minority in decades.

St Catherine’s, located at the foot of Mount Sinai, is one of the oldest Christian monasteries in the world and a UNESCO world heritage site.

Egypt’s Christian minority, which makes up about 10 percent of the country’s 92 million people, has increasingly been targeted by radical Islamic terrorists, with three deadly church attacks and a spate of killings in northern Sinai in the span of four months.

A successful assault on St. Catherine’s, one of the world’s most iconic sites for Christians, would be the latest challenge to President Abdel Fattah al-Sisi, who has pledged to protect the religious minority as part of his campaign against extremism.

Egypt is battling a radical Islamic insurgency in the rugged and thinly populated northern Sinai, which gained pace after the military overthrew President Mohamed Mursi of the Muslim Brotherhood in 2013 following mass protests against his rule.

Attacks in Egypt’s southern Sinai, a popular destination for tourists dotted with Red Sea resorts, are by contrast rare.