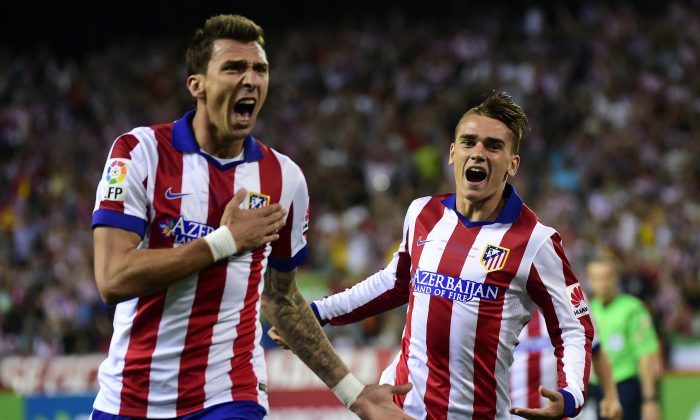 New striker Mario Mandzukic put Atletico ahead in the second minute of the match at their home ground Vicente Calderón, and the home team never looked like falling behind since.

Check below for the full match report.

MADRID (AP) — A 2nd-minute goal by striker Mario Mandzukic gave Atletico Madrid a 1-0 win against Real Madrid in the second leg of the Spanish Super Cup on Friday and overall victory with a 2-1 aggregate score.

Atletico had already begun strongly with two fast-paced attacks in the first minute.

It was not until the 25th minute that Madrid threatened Moya’s goal with a shot by Rodriguez.

The Super Cup is a two-legged match-up played before the Primera Liga season starts between the champions of the previous Liga — Atletico this year — and the winner of previous season’s Copa del Rey — Madrid.

The last time Atletico won the Super Cup was 29 years ago.

Angel Di Maria and Sami Khedira were not included in the squad by Madrid coach Carlo Ancelotti. The Italian coach had previously said Di Maria had rejected Madrid’s offer for an extension and was hence looking to transfer to another club, with Manchester United reportedly keen on the Argentine winger.

France winger Griezmann hit a long shot in the 15th minute that was deflected for a corner, a move that led to a period of pressure on Madrid’s goal.

With Atletico defender Juan “Juanfran” Torres off the field receiving treatment for a cut lip that had stained his jersey with blood, Real launched a rapid attack that ended when Moya saved Rodriguez’s 25th minute shot.

Shortly afterward, the referee ejected Diego Simeone for dissent after the Atletico coach had vociferously called for Torres’ rapid reincorporation onto the field because his treatment had finished.

Real tried to keep the pressure up and Rodriguez headed just wide of the post in the 36th, and two minutes later Gareth Bale shot just wide from a pass supplied by the Colombia forward.

Raul Garcia hit a long shot in the 44th that forced a save from Casillas. A minute later Garcia narrowly missed with a header from a corner kick just before Rodriguez countered with his third attempt on goal.

Ronaldo came on in the second half but Atletico maintained the pressure and Garcia came close to scoring the second when his 48th-minute shot was tipped by Casillas onto the frame of the goal.

Real threaded a skillful passing attack past Atletico’s midfield in the 61st, but it ended with Moya saving Ronaldo’s shot.

With Simeone pacing in the stands, Ronaldo hit a free kick into the defenders’ wall in the 68th.

This was followed by another period of pressure from Atletico that saw two shots go just wide in three minutes.

Midfielder Luka Modric was ejected on a second yellow card in injury time and teammate Sergio Ramos just missed a header that could have led to extra time.