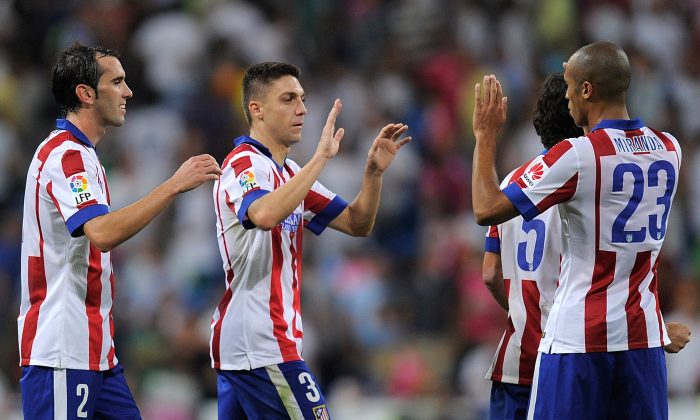 Atletico Madrid and Olympiakos Piraeus are set to play in a UEFA Champions League group stage match on Tuesday, September 16.

The game will be broadcast on Nova Sports 2 in Greece, and C+ Liga de Campeones/HD in Spain.

The game will also air on Sky Go and Sky Sports Red Button in the United Kingdom, as well as ESPN3 and Fox Deportes in the United States.

Atletico are 1/1 to win the match, while Olympiakos are 15/4 to take the game, according to OddsChecker.

See an AP preview of this week’s Champions League games.

Now the Spanish club has a new target: Achieving what no team has managed in 25 years — retaining the trophy.

The Champions League returns this week, with Madrid’s all-star lineup seemingly the team to beat again this season ahead of its first match at home against FC Basel on Tuesday in Group B.

No team has successfully defended Europe’s most prestigious club title since AC Milan in 1990, before the competition underwent a facelift and turned into the financial beast that is the Champions League.

As in recent years, Barcelona, Bayern Munich and Chelsea will be among the favorites to challenge for the title.

Here are some things to know about the start of the 2014-15 Champions League:

With four strong teams involved, Spain is aiming to continue its run of outperforming the other major European leagues in the Champions League.

Spain put two teams into last year’s final, when Madrid beat crosstown rival Atletico Madrid 4-1 after extra time, and has had two sides in the semifinals for the past four seasons. Barcelona won the title in 2011.

Like Madrid, Atletico begins its campaign on Tuesday at Olympiakos in Group A. On Wednesday, Barcelona plays APOEL in Group F and Athletic Bilbao hosts Shakhtar Donetsk in Group H.

If the start of the Premier League season is anything to go by, Chelsea will be England’s most competitive side in the Champions League.

Especially if Diego Costa keeps up his stunning form.

The Spain international’s seven goals in four games have guided Chelsea to four straight wins and first place in the Premier League.

Chelsea has been given the most benign-looking group of England’s four representatives, too, placed with Schalke, Sporting Lisbon and NK Maribor. Chelsea starts at home against Schalke on Wednesday in Group G.

Manchester City advanced from its group last season for the first time, losing in the last 16 to Barcelona. The English champions, who travel to Bayern on Wednesday in Group E, will be expected to progress further this season.

On Tuesday, Arsenal is away to Borussia Dortmund in Group D and Liverpool’s first match in the Champions League in five years is at home against newcomer Ludogorets in Group B — the same group as Real Madrid. There is no Manchester United in the competition for the first time since the 1995-96 season.

New Juventus coach Massimiliano Allegri may have started winning over his doubters with two wins out of two in Serie A, but the real test will come in the Champions League.

At AC Milan, Allegri won just 11 of his 34 Champions League matches in charge, drawing another 13, and never went past the quarterfinals.

Juventus, which hosts Malmo in Group A on Tuesday, started its domestic campaign with a 1-0 win at Chievo Verona and a 2-0 victory at home to Udinese on Saturday.

France’s two Champions League teams — Paris Saint-Germain and Monaco — have experienced strikers facing their former clubs in the first round of fixtures.

Zlatan Ibrahimovic has scored so many wonderful goals for PSG and Sweden over the past two years, he may well have lost count. PSG plays Ajax in Group F on Wednesday and the Dutch hosts will be hoping Ibrahimovic isn’t in the mood for another goal on the same ground where he scored one of his best ever.

Ten years ago, when playing for Ajax, Ibrahimovic scored a mesmerizing solo effort against NAC Breda — dribbling past several players before caressing the ball home.

Ibrahimovic has scored five goals in four games this season but PSG has looked very patchy and is overly dependent on its captain.

After losing its two biggest stars in the transfer window — Radamel Falcao and James Rodriguez — Monaco has struggled and is languishing in 18th place in the French league.

The 33-year-old Dimitar Berbatov has been left as Monaco’s main striker and will be up against his former team Bayer Leverkusen, where he made his name in European football.

There are two newcomers in this season’s Champions League, Ludogorets from Bulgaria and Malmo from Sweden.

Ludogorets advanced from the playoffs in memorable fashion when a defender — Cosmin Moti — saved two penalties in a shootout win over Steaua Bucharest after the team’s goalkeeper was sent off late in extra time.

Ludogorets plays Liverpool at Anfield in Group B on Tuesday.

Malmo reached the European Cup final in 1979 when it lost to Brian Clough’s Nottingham Forest. It also played in the 1990-91 European Cup and is Sweden’s first group-stage representative in 14 years.

Malmo travels to Juventus in Group A on Tuesday.