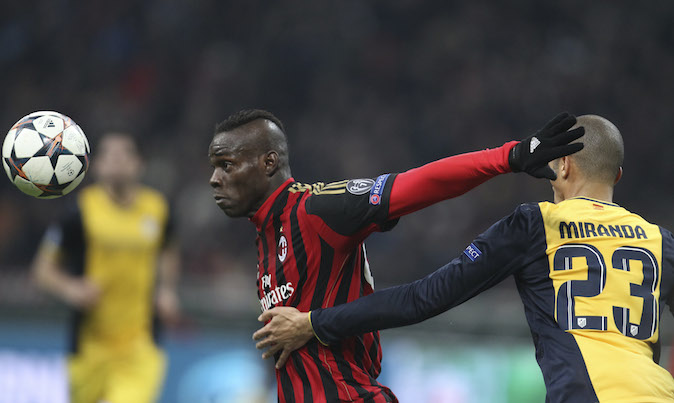 The game will be broadcast on Sky Calcio 1 in Italy.

The game will also air on Fox Soccer Plus and Fox Sports 2 USA in the United States.

Atletico Madrid will miss Tiago (knee and wrist) and Javier Manquillo (fractured vertebrae) to injury for this fixture.

Milan captain Riccardo Montolivo is unavailable due to a two game suspension he incurred during a group stage match against Ajex. Milan’s top goal scorer Mario Balotelli and defender Cristian Zapata are set to return.

MADRID— Mario Balotelli is back for AC Milan, and that could be bad news for Atletico Madrid.

Atletico, already holding a 1-0 lead from the first leg, will host Milan on Tuesday in the last 16 of the Champions League.

But Balotelli’s return after missing the first leg with a shoulder injury will be a boost for the Italian club as it looks for an eighth European Cup title.

Here are five things to know about the match at Vicente Calderon Stadium:

After missing the first leg with a shoulder injury, Mario Balotelli returned to action on Saturday as a substitute in Milan’s 1-0 loss at Udinese.

“Their team is stocked with talent, and Balotelli is one of their biggest threats. But not their only one,” Atletico coach Diego Simeone said Monday. “Our worry will be about shutting down their play from the point where it begins, so it doesn’t reach him.”

Atletico hasn’t reached the quarterfinals of the Champions League since 1997 — when Simeone played for the club — but it has won all UEFA series after taking the first leg.

Milan, meanwhile, hasn’t overcome a first-leg home loss in Europe’s top-tier competition since the 1955-56 season when it rallied past German club Saarbrucken.

“I don’t know what kind of game to expect,” Simeone said. “After the first leg result, they need a goal. We need to control the game.”

The two clubs are going through very different seasons, but Milan coach Clarence Seedorf will look to his team’s first-leg loss for inspiration.

Milan put on one of the best performances of its season against Atletico at the San Siro, hitting the woodwork three times.

“It could have finished 2-0 but we were unlucky,” Milan midfielder Adel Taarabt. “Nevertheless, Tuesday we will not have any fear of facing Atletico.”

Simeone can count on a full squad against Milan after Portugal midfielder Tiago Mendes returned to training.

Striker Diego Costa missed Saturday’s 2-0 victory at Celta Vigo, and will be well-rested, with Simeone needing to decide whether to let the Spain striker lead the attack alone or partner him with David Villa, who has yet to play in the Champions League this season.

Tiago had been sidelined about one month because of separate knee and hand injuries.

“Diego Costa, (defender Diego) Godin, and (midfielder) Arda Turan will all return,” Simeone said, “and there could be more changes.”

Atletico is pushing for a first league title in 18 years and remains only three points behind Spanish leader Real Madrid after moving ahead of Barcelona.

Milan, meanwhile, recorded a second straight loss to slump to 10th in Serie A.

“We had to leave out several players after international games, and the necessity to rest a couple. I think that all influenced the match,” Milan vicepresident Adriano Galliani said of the Udinese result. “Had we played on Sunday, with 24 hours more rest, it would have been better, but the calendar is that or nothing. Now we have to forget about Udinese and recharge our batteries ahead of Tuesday.”