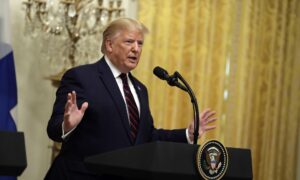 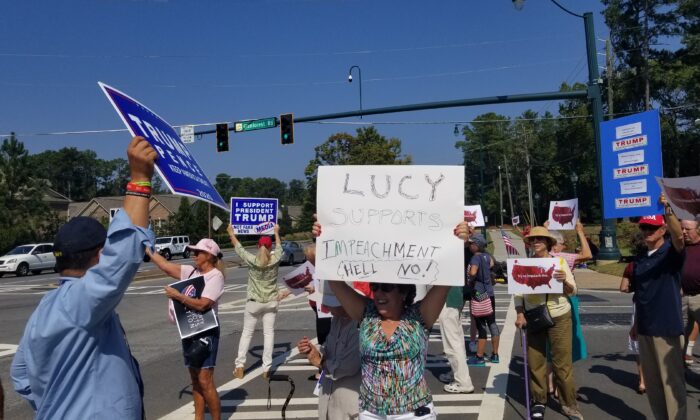 The Atlanta Tea Party, joined by Tea Party Patriots founder Jenny Beth Martin, kicked off their first in a nationwide series of congressional office visits Wednesday to pressure lawmakers to drop the impeachment effort against President Donald Trump for his call with the president of Ukraine. After this pilot run, Tea Party Patriots will be protesting at lawmakers’ offices around the United States on Oct. 9.

Democrat Georgia congresswoman Lucy McBath’s staff locked her office door on the pro-Trump protesters, allowing only a small handful to discuss their concerns with staff. McBath has signaled her support for an impeachment inquiry into allegations that Trump pressured the president of Ukraine to investigate Joe Biden’s corruption in the country. The president of Ukraine said that Trump did not pressure him. Trump has released a transcript of the July phone call in question.

“We had about 30 people there. They made us leave the parking lot. They said that was private property, so we were on the main road. We were peaceful, waving signs,” Atlanta tea party leader Debbie Dooley told The Epoch Times.

“Toward the end of the protest, I gathered 15 people who were constituents of Lucy McBath, and said let’s go talk to her. We had a line of them. They (McBath’s staff) were freaking out when we came in. They said this is private. We said its taxpayer funded!,” Dooley said. “They let us in. We got on the elevator as many as we could.”

Dooley said that when the protesters made it upstairs to McBath’s office, the Democrat’s staff locked the door.”

“We had people 55 and over. They locked it for safety or security reasons. They said only 3 of you can go in and talk to [McBath’s staff],” Dooley said, noting that McBath’s staff handed out comment cards for the rest of the protesters to fill out. Slightly more than three people made their way into the office.

“They didn’t like it,” Dooley said of McBath’s staff. “As many times as the left goes to congressional offices without appointments, they want to lock the doors on their constituents? This is what we need to be doing across this nation. This is going to happen across this nation on the 9th. We have people emailing, saying, hey we want to be part of this too.”

“Grab a buddy or two, show up at your local congressional office on Oct. 9, and exercise your First Amendment rights. Let your representative know you do not want the 2016 presidential election undone and do not want President Trump to be impeached,” Jenny Beth Martin recently told The Epoch Times.

“Now is the time to act. Turn your passion and anger and frustration into action to stand for President Trump and against impeachment. Show up and make your voices heard,” Martin said.

Rep. McBath’s Atlanta office could not be reached as of press time.