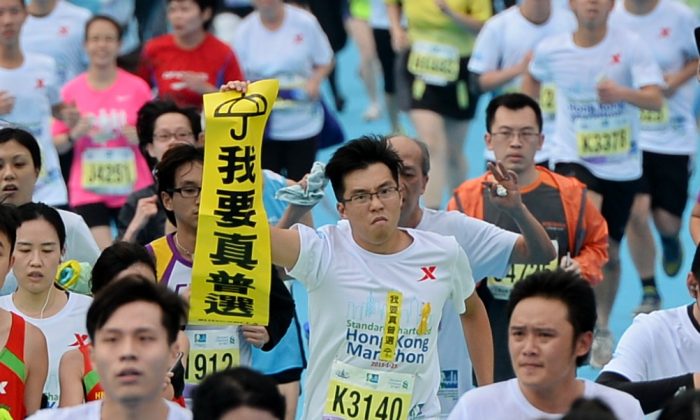 At the Hong Kong Marathon, a Call for True Democracy

Dozens of pro-democracy activists showed up at the annual Hong Kong Marathon early morning Sunday to call for free elections in the city and demand the resignation of several top officials.

Leung, Lam, and members of the pro-Beijing establishment have come under fire for appearing unmoved and unsympathetic towards Hongkonger’s cries for a free vote in the city’s next Chief Executive elections in 2017, even after Hong Kong’s youths led a 79-day long street occupation—the Umbrella Movement—to demand true democracy.

Police commissioner Tsang has been slammed for not taking sufficient action to discipline police officers who violently attacked protesters, passers-by, and the press during the Occupy protests, as well as for planning to deal harshly with minors involved in pro-democracy activities.

Lawmaker “Long Hair” Leung Kwok-hung (no relation to Leung Chun-ying), a familiar face at pro-democracy activities, had tough words and some advise for the police commissioner and the embattled Chief Executive.

If Tsang is unable to give satisfactory answers or let questionable police behavior go unpunished, “he should resign,” Long Hair added.

As for Leung, Long Hair theorizes that “he is avoiding the people and the press because he’s afraid of them.”

In fact, Leung is so afraid that he has failed to preside over three consecutive Hong Kong Marathons, Long Hair notes.

Leung is listed as the Hong Kong Marathon’s sole official patron, but it is unclear if it is a must for the patron of the city’s premier running event to show up as a VIP.

And Long Hair’s advise? Leung should reserve his pro-Beijing “hot air” for his “birthday and April Fools’ Day,” then spend the remaining 363 days of the year earnestly communicating with and being accountable to Hongkongers.

Meanwhile, the Socialist Action political group, who showed up at the marathon, slammed Leung for recently ending a lawmaker pay freeze that was instituted in 2009. The second-highest paid head of state in the world will soon earn about $575,595 a year, and his unloved deputies would also get a pay raise.

Socialist Action argues that the lawmakers don’t deserve such high salaries because they are not popularly elected, and the pay raise will only further distant Hong Kong’s leaders from ordinary residents.

Mr. Kwan, an IT professional, told Epoch Times: “Without true universal suffrage, there won’t be fairness in Hong Kong society.”

And without true democracy, said Jason, a driver, Hong Kong’s leader won’t be answerable to the residents, and the government would definitely pass policies that won’t benefit the people.

Jason’s view was echoed by another runner who called himself “CK.”

“With genuine universal suffrage, we can rein in a leader that has gone too far,” said CK.

“If a leader is allowed to go unchecked and does as he pleases, residents will suffer.”