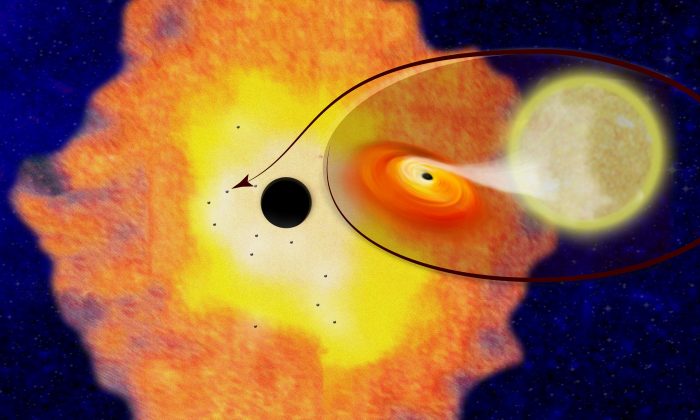 Twelve black hole low-mass binaries orbiting Sagittarius A* at the center of the Milky Way galaxy, appear in this illustration provided by Columbia University, on April 5, 2018. (Columbia University/Handout via Reuters)
Space

At the Center of Our Galaxy, There’s a Black Hole Party

WASHINGTON—Black holes are hanging out at the center of our galaxy by the thousands, according to scientists who have detected a bunch of them in the neighborhood of a supermassive black hole already known to reside at the heart of the Milky Way.

Researchers said data from the NASA’s orbiting Chandra X-ray Observatory allowed them to detect a dozen black holes surrounding Sagittarius A*, the mammoth black hole at the center of our spiral-shaped galaxy.

Black holes, which come in a variety of sizes, are extraordinarily dense entities with gravity so powerful that not even light can escape. Based on these findings, the scientists estimated that up to 10,000 black holes dwell within about 3 light years of Sagittarius A*.

Sagittarius A*, boasting 4 million times the mass of our sun, is located 26,000 light years from Earth. A light year is the distance light travels in a year, 5.9 trillion miles (9.5 trillion km).

The findings, which confirm decades-old predictions, provide insight into a fundamental aspect of galaxies.

The newly detected black holes, all produced by the collapse of massive dying stars, are rare ones that captured and bound themselves to a passing star, forming what is called a stellar binary.

Black holes in isolation are hard to find, but the X-ray signatures of stellar binaries allowed their detection.

“Black holes can form farther out from the center of the galaxy. They gravitationally interact with stars, cosmic collisions so to speak, and lose energy,” Hailey said.

“As they lose energy, they sink to the center of the galaxy, the same way heavy sediment sinks faster than light sediment in water. They get captured by the gravity of the supermassive black hole, catch a star, and voila, you have something we can see X-rays from.”

Supermassive black holes arise relatively soon after their galaxies are formed, devouring enormous amounts of gas, dust and stars to achieve colossal size. Hailey said, “As one black hole grows to such huge size, even if it was not originally in the exact center, it will sink into the center of the galaxy.”