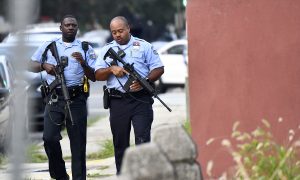 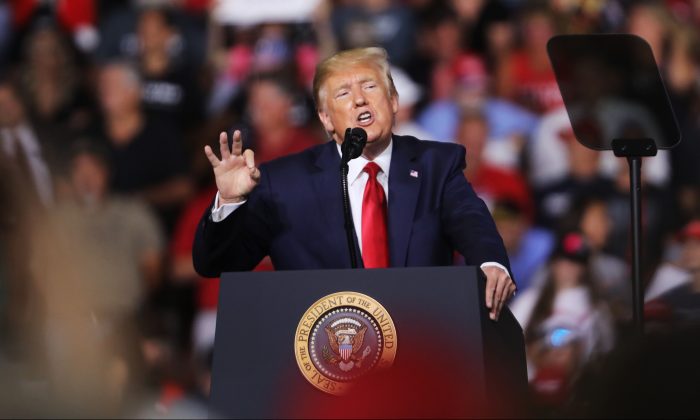 President Donald Trump said there is a mental illness problem in the United States that needs to be addressed during remarks at a re-election rally in Manchester, New Hampshire.

The President said he is giving “major consideration” to building more mental institutions in order to keep dangerous people off the streets.

Trump brought up how many mental institutions across the United States have been forced to close in recent years. At the same time, he said the second amendment and the right to self defence must always be upheld, adding that, “We can’t make it harder for good, solid, law abiding citizens to protect themselves.

“Years ago many cities and states closed mental institution for budgetary reasons. They let those people out onto the street,” Trump said at the Southern New Hampshire University Arena.

“We are going to have to give major consideration to building new facilities for those in need, we have to do it,” he added.

During his evening remarks at his “Keep America Great” rally, Trump lamented the fact that mentally ill people were not getting the proper care they needed. According to Trump’s 2020 campaign manager, Brad Parscale, there were roughly 12,000 people in attendance at the arena.

“We are working very hard to make sure we keep guns out of the hands of insane people and those who are mentally sick and shouldn’t have guns,” Trump continued.

“But people have to remember, however, that there is a mental illness problem that has to be dealt with. It’s not the gun that pulls the trigger, it’s the person holding the gun,” he said.

In an address to the nation earlier this month, Trump proposed a series of actions to combat mass shootings, including reforming mental health laws and reinstating the death penalty for those who commit hate crimes and mass murders.

In one of the latest shooting incidents, a man opened fire on Philadelphia police on Aug. 14, wounding six officers and triggering an hourslong standoff. It has since been revealed that he was a convicted felon who wasn’t legally allowed to possess a firearm.

Amid the standoff, video footage from witnesses also appeared to depict onlookers taunting and throwing things at officers who were responding to the shooting. Authorities said they have placed the shooter into custody.

At the rally, Trump repeatedly made comments in support of law enforcement. The president also condemned Democrats who he said were igniting anti-police rhetoric.

“As we restore our prosperity, we are also restoring public safety,” Trump told the crowd. “We are fighting to reduce violent crime. We see so much of it over the last 25 years. Those gentlemen that we just saw, the law enforcement … they do a great job.

“Radical democrats are trying to tear America apart. They vilify anyone who doesn’t share their extreme views. They slander our law enforcement heroes … You see what they are doing?” Trump said. “Has anyone seen anything like the water being thrown on New York’s finest?”

“I know a lot of New York’s finest; they are not happy,” Trump said. “For that to be allowed to happen is a disgrace.”

Trump was referring to a rash of such attacks in New York City in July when onlookers threw water on officers. New York lawmakers are now pushing a bill that would make throwing water on police officers a felony. The legislation would make it a Class E felony to throw or spray water or another substance against a police officer or peace officer. Violators would face up to four years in prison.

Heather Mac Donald, conservative commentator and author of the 2016 book ‘The War on Cops’ called the harassment of the officers “part of an ongoing delegitimization of law enforcement.”

She pointed to recent comments made by Sen. Elizabeth Warren (D-Mass.) and Kamala Harris (D-Calif.)—both presidential candidates—who called the 2014 police killing of Michael Brown in Ferguson, Missouri, a murder. Multiple investigations, including by the Justice Department under President Barack Obama, cleared the responsible officer, Darren Wilson, of wrongdoing.

“The false attacks on policing continue, and that trickles down to the streets. I’ve been hearing from officers for several years now about the ugly, ugly hostility that they get when they’re going about their ordinary duties,” Mac Donald told The Epoch Times previously.