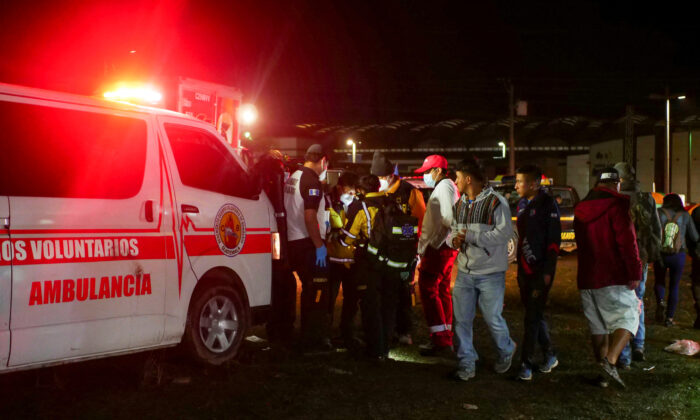 Paramedics and government officials stand at a scene following a stampede at a concert to commemorate the country's Independence Day that left people dead and injured, in Quetzaltenango, Guatemala, on Sept. 15, 2022. (Stringer/Reuters)
Americas

At Least 9 Dead, 6 Hospitalized After Stampede at Guatemala Concert

GUATEMALA CITY—At least nine people died in a stampede at a large rock concert in the western Guatemalan city of Quetzaltenango, emergency services said on Thursday.

Two 12-year-old children were among the dead, according to Maria del Carmen Sajquim, spokesperson for Guatemala’s Western Regional Hospital.

Six people were injured, she added.

The injured people were transferred to the hospital and were believed to have suffered fractures, local firefighters said earlier on Twitter.

Witnesses at the scene said the venue for the event only had two exit doors.

First aid workers were helping injured people and ambulances were at the scene, images from Guatemala’s Red Cross showed on Twitter. Local media described the concert as an annual event marking independence day in the Central American country.