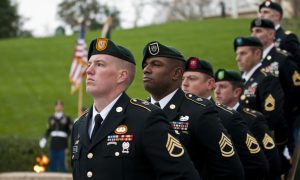 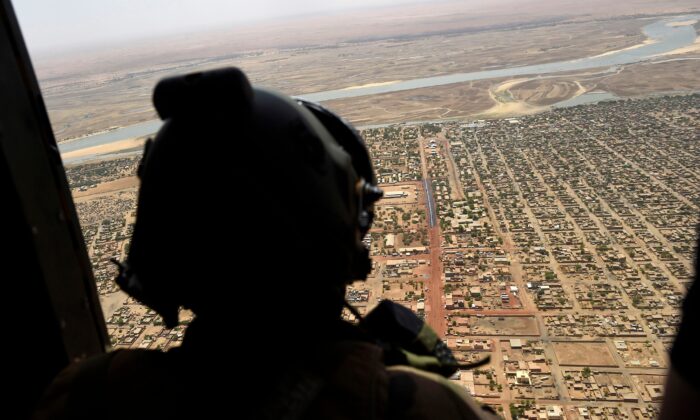 In this file photo, a French soldier stands inside a military helicopter during a visit by French President Emmanuel Macron to the troops of Operation Barkhane on May 19, 2017. (Christophe Petit Tesson/Pool via AP)
Africa

NIAMEY—At least 70 civilians were killed in simultaneous attacks on two villages by suspected Islamist extremists in Niger, near the border zone with Mali, security sources said on Saturday.

About 49 villagers were killed and 17 people wounded in the village of Tchombangou, said one of the security sources, who requested anonymity.

A second source, a senior official in Niger’s interior ministry who also spoke on condition of anonymity, said that around 30 other villagers had been killed in the village of Zaroumdareye.

The West African nation has previously suffered attacks by Islamist extremists linked to al Qaeda and ISIS. Attacks near the western border with Mali and Burkina Faso, and the southeastern border with Nigeria, killed hundreds of people last year.

Niger just held its presidential and legislative election on Dec. 27, 2020, with the presidential election now heading to a February runoff after ruling party candidate Mohamed Bazoum failed to reach the 50 percent vote needed to win the first round. He will now face former president Mahamane Ousmane in a vote scheduled for Feb. 21.