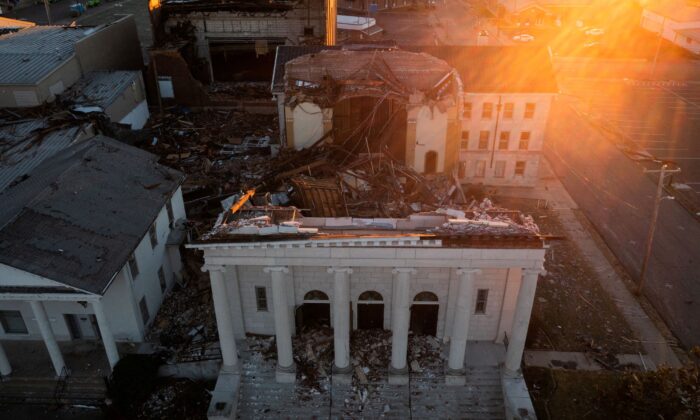 The First United Methodist Church is seen destroyed at sunrise in the aftermath of a tornado in Mayfield, Ky., in this picture taken with a drone, on Dec. 13, 2021. (Adrees Latif/Reuters)
Local News

MAYFIELD, Ky.—At least 64 people, including six children, lost their lives in Kentucky after a raft of tornadoes tore through six states, with power still out for thousands and strangers welcoming survivors who lost everything into their homes.

While the toll from the deadly twisters was lower than initially feared, Kentucky Governor Andy Beshear said he expects it to increase as searchers continue to sift through a flattened landscape of twisted metal, downed trees, and homes reduced to rubble.

“It may be weeks before we have counts on both deaths and levels of destruction,” Beshear told reporters, adding that the victims ranged in age from 5 months to 86 years old, and that 105 people were still unaccounted for.

On Monday, Beshear said officials were working to confirm that eight people had perished when a candle factory in Mayfield, a town of about 10,000 in the southwestern corner of Kentucky, was hit in the storm.

Out of the 110 workers who had been toiling at the Mayfield Consumer Products LLC factory, 94 were believed to have made it out alive, according to the owners of the business, the governor said.

“We feared much, much worse,” he said. “I pray that it is accurate.”

In the hard-hit small town, the tornado destroyed not only the candle factory but also the police and fire stations. Homes were flattened or missing roofs, giant trees uprooted and street signs mangled.

More than 300 National Guard personnel and scores of state workers were distributing supplies and working to clear roads so that mountains of debris can be removed in the aftermath of the disaster, the governor said.

He added that authorities were coordinating an “unprecedented amount of goods and volunteers,” and President Joe Biden was expected to visit the state but no date had been set.

Beshear, at times chocking up, said the search, rescue, and recovery process in the swath of destruction has been an emotional roller coaster for all those involved, including him.

“You go from grief to shock to being resolute for a span of 10 minutes and then you go back,” he said.

While Kentucky was hardest hit, six workers were killed at an Amazon.com Inc. warehouse in Illinois after the plant buckled under the force of the tornado, including one cargo driver who died in the bathroom, where many workers told Reuters they had been directed to shelter.

A nursing home was struck in Arkansas, causing one of that state’s two deaths. Four were reported dead in Tennessee and two in Missouri.