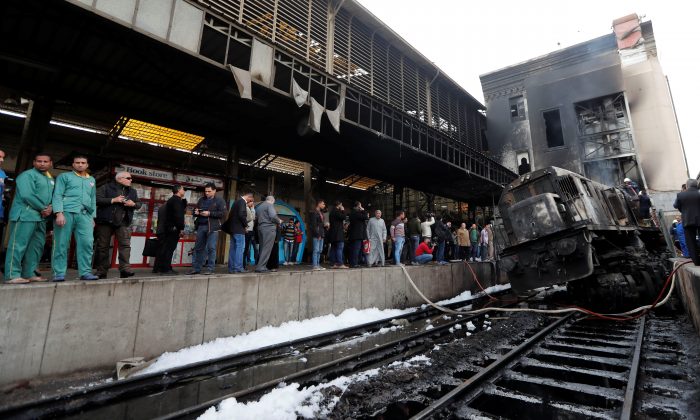 CAIRO—At least 20 people were killed and dozens injured when a locomotive smashed through the buffers and burst into flames at Cairo’s main train station on Feb. 27.

Egypt’s public prosecutor said a preliminary investigation indicated the driver stepped off the train to talk to another driver without pulling the hand brake, causing the unattended locomotive to speed off and hit a concrete platform.

Security camera footage from inside the capital’s Ramses station showed the train failing to stop as it arrived at platform six, smashing through the buffers and a metal end railing and exploding into a huge ball of fire.

Passengers carrying luggage ran for their lives as the fire spread, and several people were running covered in flames, witnesses said.

Egyptian state television said the train driver had been arrested.

Health minister Hala Zayed said authorities had not been able to identify many of the 20 bodies recovered because they were too badly burned.

Egypt has one of the oldest and largest rail networks in the region and accidents causing casualties are common. A train collision in Alexandria killed more than 40 people in 2017.

Egyptians have long complained that successive governments have failed to enforce basic safety standards for the railways.

The fire sent smoke billowing above the station. Inside, the train’s charred engine could be seen tilted to one side next to a platform.

Zayed said that as well as the 20 killed, 43 people were injured, 15 of whom had been released after treatment. State television earlier put the death toll at 25 and said 50 were injured.

Prime Minister Mostafa Madbouly, announced from the station that the incident would be investigated and anyone found responsible would be held to account.