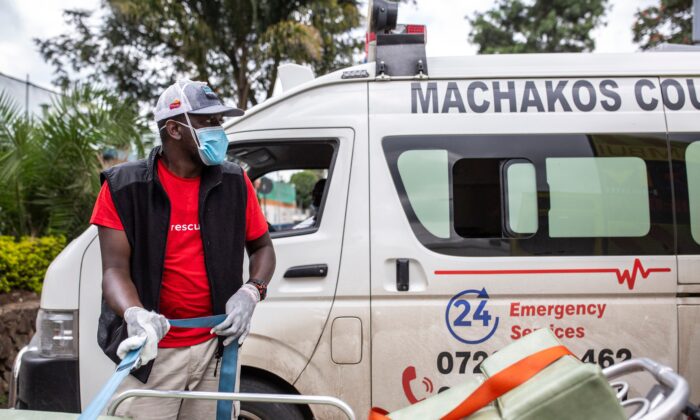 A file photo of an ambulance operator at Kenyatta National Hospital in Nairobi, on April 17, 2020. (Patrick Meinhardt/AFP via Getty Images)
Africa

NAIROBI—At least 20 people drowned on Saturday when a bus carrying a group of religious faithful was swept away by flood waters as the driver tried to cross a river in the eastern Kenyan county of Kitui, the county governor said.

Many parts of the East African nation have been experiencing heavy rainfall in the past week. At least 17 people were rescued after the bus was swept into the River Enziu, the governor, Charity Ngilu, said.

“This afternoon tragedy has struck Kitui county,” she wrote on Twitter, adding that rescue operations were being carried out by personnel from the Kenya Red Cross and security agencies.

Footage aired on the local Citizen Television showed a yellow bus, with branding on the side showing it belongs to a local seminary, driving into the swollen river as a crowd of locals looked on.

The bus is then seen disappearing into the waters midway across, causing frantic wailing among the onlookers.

By Duncan Miriri and Humphrey Malalo.