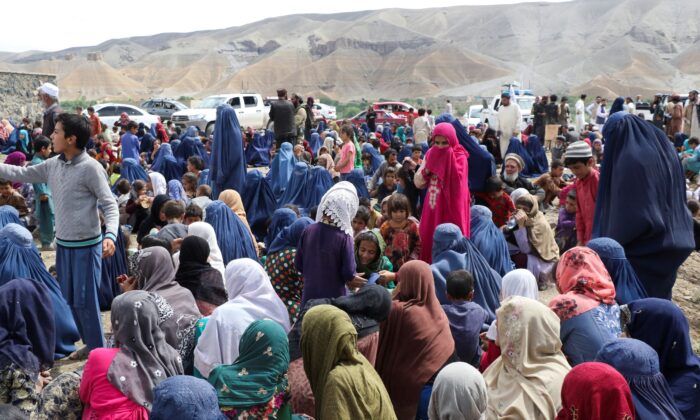 Displaced Afghan families spend time together after the heavy flood in the Khushi district of Logar, Afghanistan, on Aug. 21, 2022. (Stringer/Reuters)
Afghanistan

KABUL—At least 20 people have been killed in flash floods in central Afghanistan over the last 48 hours, a disaster management official said on Monday, with heavy rain destroying thousands of homes and damaging agricultural land.

The country has been reeling from natural disasters this year, including a drought and a massive earthquake that killed over 1,000 people in June.

“Twenty are dead, 35 have been injured due to flooding in Logar province,” said Mohammad Nassim Haqqani, the spokesman for Afghanistan’s disaster management authority.

The Taliban extremists, who took over the country last August, has struggled to cope with the disasters and has called for assistance.

Global humanitarian agencies have provided assistance for months, but have warned that they needed more access and funding to avoid a humanitarian disaster with thousands left homeless and no access to shelter or clean drinking water.