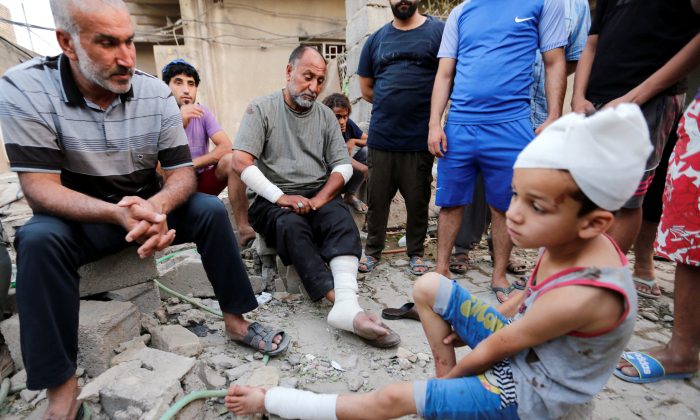 A man and his son, who were wounded, sit near the scene of an explosion in Baghdad's Sadr City district, Iraq June 7, 2018. (Wissm al-Okili/Reuters)
Middle East

At Least 18 Killed in Baghdad Explosion

BAGHDAD—At least 18 people were killed and over 90 wounded in an explosion in Baghdad’s Sadr City district on Wednesday, an Iraqi police source said.

Photos from the scene showed a destroyed car and building as well as weeping relatives of victims.

An interior ministry spokesman said in a brief statement the blast was the result of the detonation of an ammunitions cache and that security forces had opened an investigation.

The ammunition had been stored in a mosque and the explosion happened during its transfer into a car parked nearby, the police source said.

Earlier, state television cited a ministry spokesman describing the explosion as “a terrorist aggression on civilians,” which had caused “martyrs and wounded”.

Authorities did not offer an explanation of the discrepancies between the two statements, neither of which gave casualty figures.

Sadr City is a stronghold of nationalist cleric Moqtada al-Sadr, whose political bloc won a May 12 parliamentary election. Parliament ordered a national recount of votes on Wednesday.

In May, two homemade bombs targeted the headquarters of the Iraqi Communist Party, which is part of Sadr’s bloc.

By Ahmed Aboulenein and Huda Majeed