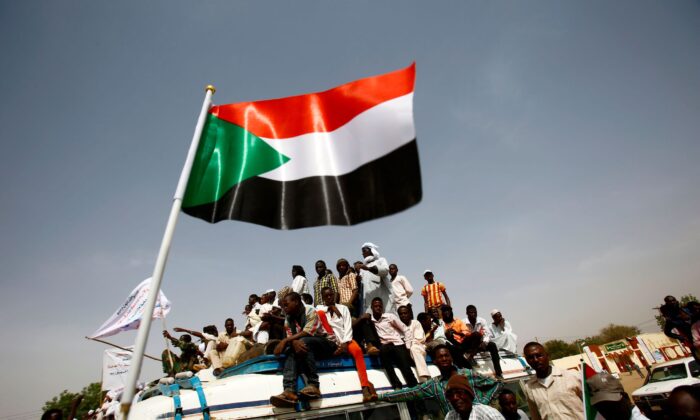 Sudanese wave national flags during a rally in the town of Zalingei, capital of Central Darfur state on April 3, 2016. (Ashraf Shazly/AFP via Getty Images)
Africa

KHARTOUM—At least 168 people have been killed and 98 injured in tribal clashes in the western Darfur town of Kreinik, a spokesperson for a refugee group said on Sunday.

The violence is the latest in an uptick of such incidents in the war-weary region.

Western Darfur is home to many of the people displaced by the early-2000s conflict in the region, which saw the government put down armed rebels with help from nomadic Arab militias known as the Janjaweed.

Some 2.5 million people were displaced in the violence and 300,000 were killed. Former President Omar al-Bashir is wanted by the International Criminal Court on war crimes charges. The trial for one of his aides, known as Ali Kushayb, began earlier this month.

The Coordinating Committee for Refugees and Displaced People accused Janjaweed militias of attempting to clear the area to take control of the land.

They called for the return of international peacekeepers, who withdrew beginning in January 2020.

Representatives for Arab tribes did not respond to calls for comment.

Violence broke out on Friday in Kreinik between Arab nomads and Masalit farmers after an individual altercation, according to several non-governmental organizations.

The Coordinating Committee shared images of burned down buildings. The Darfur Bar Association said that some 20,000 people had been displaced by the violence.

Tensions extended to the nearby city of El Geneina, aid groups said, where stores were ordered to close after sundown.

“Another flare-up of urban violence that killed and injured hundreds of civilians in Geneina city last year is a very real, immediate possibility,” said an aid official who said road blocks had gone up across the city.

Violence in Darfur has increased since an October 2020 agreement between the country’s post-Bashir transitional government and some of the armed groups that had fought in Darfur.

“This demonstrates that there was no positive effect from the agreement on people’s lives or security across the states of Darfur,” the Darfur Bar Association said in a statement on Saturday.